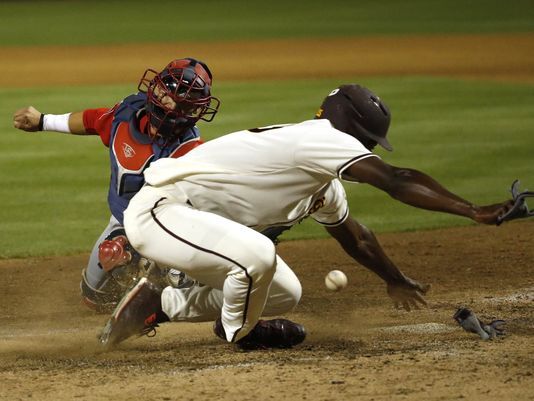 Pac-12 baseball has only two weeks left of the regular season. Here on Sports360AZ.com, Pac-12 at the Plate is the place to keep up with how ASU and Arizona baseball are stacking up in the conference. This week ASU (22-26, 8-16 Pac-12) hosts No. 18 Arizona (33-17, 12-12 Pac-12) in a Territorial Cup matchup. Here’s what you need to know about last weekend’s conference series and what to watch for this weekend:

Arizona and ASU have met twice this season in non-conference midweek matchups. This weekend the in-state rivals will meet for a three-game conference series in Tempe. Arizona took game one 11-2 and ASU took game two 14-13.

Arizona will look to revive their somewhat dormant bats from their trip to Charleston. JJ Matijevic continues to lead the charge for the Wildcat offense. Matijevic is seventh in the nation in batting average at .402, second in doubles (25), tied for 25 in RBIs (57) and tied for 41 in runs (52). The junior leads the team in batting average, doubles, home runs (10), RBIs and hits (82).

Outfielder Gage Canning leads the Sun Devils offensively. Canning is batting at .337 with 35 runs, 67 hits and five home runs. His team leading seven triples is fourth in the nation. The bats of freshmen Lyle Lin, Carter Aldrete and Hunter Bishop have been big contributors this season as well.

This weekend an eye will be on if ASU’s pitching can keep Arizona’s bats quiet. Pitching has been one of the Sun Devils’ weaker spots this season. Arizona’s pitching, JC Cloney, Cameron Ming and Cody Deason, have been solid throughout the year. ASU will face some difficulty in those matchups.

With a series loss against Washington last weekend, the Sun Devils will not reach their nation-leading 55th consecutive season of 30 wins. Coming into this weekend’s series against Arizona, ASU is 23-26. With only six games left in 2017, even if the Sun Devils were to win all six, they would fall short of continuing the record.

Saturday, ASU took game two against Washington, 8-5 behind a career day for sophomore infielder Jeremy McCuin. McCuin went 3-4 with two doubles. The Sun Devils all recorded a hit in the win with freshmen Hunter Bishop and Carter Aldrete both notching a triple each. On the bump, junior pitcher Ryan Hingst was impressive in relief going five innings allowing two runs on five hits with one walk and three strikeouts.

ASU was shut out by Washington 4-0 on both Friday and Saturday.

Tuesday, ASU visited Seattle U for a midweek. The Sun Devils won 6-4. ASU scored four runs in the seventh inning propelling them ahead. McCuin again was the force in the Sun Devils’ lineup going 3-4 with two RBIs. Senior catcher Zach Cerbo went 2-3 with a home run and two walks in the victory.

Arizona got a change of scenery as they traveled east to take on the College of Charleston.

JC Cloney got his first loss of the season on Friday as the Arizona bats couldn’t getting going, dropping game one 3-1. Cloney went 6 2/3 innings giving up three runs on eight hits with no walks and four strikeouts. The Cougars held the Wildcats to only two hits on Friday. JJ Matijevic hit a home run for the Cats’ only run and Nick Quintana doubled, but that would be it for Arizona.

Saturday, the Wildcats rallied back to get the 4-3 win. The Cougars jumped out to an early lead, but smart base running and clutch hitting was in Arizona’s favor to put them ahead to get the win. Michael Flynn was solid in relief, pitching three scoreless innings and striking out four.

On Sunday, Arizona looked more like themselves with a 6-0 win behind a strong day of pitching by sophomore Cody Deason. Deason went 6 1/3 innings allowing six hits and striking out four, walking one. Senior infielder Kyle Lewis went 4-4 in the win.

We've tried to tell you. #TheHitman always strikes on Sundays. That's a 4-4 day for Kyle Lewis. 2 men on with 1 gone here in the 8th. pic.twitter.com/afTY0aruVp

Washington @ No. 11 Stanford: The Cardinal have been climbing up the rankings since sweeping Arizona. Stanford got the series win against Cal last weekend. They have now won 10 of their last 11 conference series. Washington was swept by Arizona in a tight series and took the series against ASU in the last two weekends. The Huskies will look to fix some shortcomings this weekend against the Cardinal to shake things up at the top of the Pac.

Utah @ UCLA: UCLA is still sitting towards the top of the Pac despite dropping last weekend’s series to Washington State. Utah swept USC and is sitting right behind Washington in the conference. Both of these teams have been surprising this season, this will be a fun matchup this weekend.

Washington State @ No. 1 Oregon State: Oregon State took the Pac-12 title over the weekend with a sweep of Oregon and the Beavers are the unanimous No. 1 for the eighth week in a row. Washington State has been doing well in conference play with four straight conference series wins. OSU still has a nation-leading 1.90 ERA and Luke Heimlich still leads the country with a .76 ERA across 94 1/3 innings pitched.

Oregon @ USC: These two teams find themselves at the bottom of the Pac entering the final two weeks of the regular season. The Trojans were swept by Utah last weekend, while the Ducks were swept by in-state rival Oregon State. Both will be looking to finish up the year in conference play on a somewhat positive note with this weekend’s series.