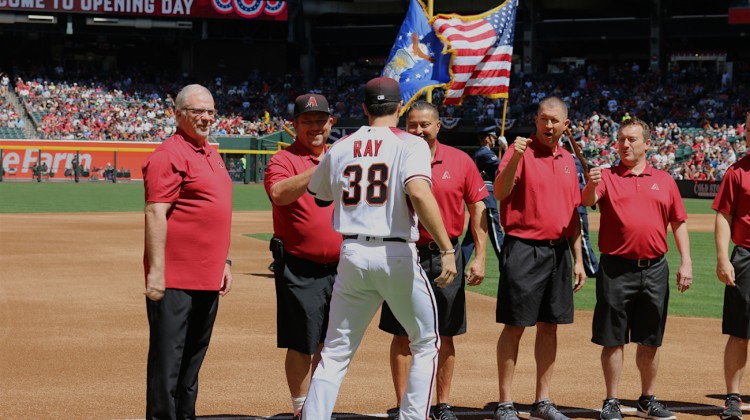 Once upon a time, there were two teams who hesitated to trade left-hander Robbie Ray. Eventually, they both did. First, he went from the Nationals to the Tigers, and then from Detroit to Arizona.

But those two teams probably didn’t regret their decisions. Not until recently, at least.

Ray threw the first complete-game shutout of his career on Tuesday as he used 115 pitches to go the distance in the Diamondbacks’ 3-0 win over the Pirates.

He became the first D-backs pitcher to throw a shutout with 10 or more strikeouts on the road since Randy Johnson did so in his perfect game against the Braves in 2004.

“It’s taken a little bit of time, but sometimes it does take time with pitchers,” ESPN’s Pedro Gomez told Sports360AZ’s Jeff Munn on Wednesday. “I was one of those people who thought, ‘Okay, here’s a left-handed pitcher who throws in the 90s and two organizations have already dealt him before his 25th birthday.’ That’s kind of revealing.

I thought it not in a good way. But boy, it just goes to show people mature at their own rate in terms of major league ability.”

The D-backs are in an interesting position. At the start of Wednesday, they were in third place in the NL West, but still 11 games over .500.

The question perhaps becomes: Will General Manager Mike Hazen make a move at the trade deadline that could bolster his club’s chances of making the postseason? Or will he just be satisfied with the growth the group has shown this year and take the process slowly.

Gomez said Robbie Ray is unlikely to be dealt because he is under club control for several more years at an inexpensive rate. However, another starter may be more likely to be moved.

While the D-backs spent Memorial Day in Pittsburgh, there were some fireworks in the Bay Area as San Francisco’s Hunter Strickland drilled Washington’s Bryce Harper with a pitch. Harper charged the mound, threw his helmet and a huge fight burst out.

Before both players filed appeals, the league was going to suspend Harper for four games and Strickland for six. Gomez said he didn’t agree with the initial ruling because Harper would theoretically still miss more time than Strickland.

“I’m not saying it has to be inning for inning, but you’re losing out on arguably the best player in the National League for 36 innings and the Giants are losing out on a middle reliever for three innings,” he said.

Down in San Diego, the Padres completed a sweep of the defending World Series champions with a 2-1 win over the Cubs on Wednesday. Chicago General Manager Theo Epstein has shown he will make moves when need be instead of waiting until the July 31 trade deadline.

The Cubs’ potent lineup is bound to find its groove, but the pitching may be a bigger concern as the club heads into June at two games below .500.

“You’re looking at some guys in the rotation — John Lester, John Lackey — that are a little bit older,” Gomez said. “Kyle Hendricks, as much of a great season as he had last year winning the ERA title, he’s struggled this year. They have not been able to put it together in terms of the rotation right now. Arrieta is not pitching as consistently as he has the past two seasons.”