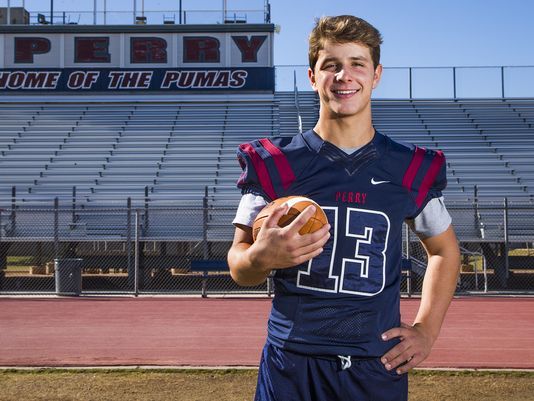 I’ve been making the rounds at various spring ball camps this week, and it seems as though there are plenty of quarterback updates with top programs:

Brock Purdy underwent a procedure to remove cactus stickers out of his left (non-throwing) hand. Purdy hit a Saguaro cactus while on a team paintball trip. Not to worry, Puma fans. Purdy was told me he would only be out about a week and a half.

“When It hit me, I thought it was just a normal splinter but when we went to Urgent Care, they said I needed surgery,” Purdy said over text. “But I knew it was going to be alright as they said it looks like a week’s recovery.”

A busy day was even busier for Purdy, as the quarterback that accounted for 48 touchdowns his junior year picked up offers from UNLV and New Mexico State.

In an AZ Audibles segment a few weeks ago, I said Jacob Rowland would be under center for Higley this season. He was Mason Crossland’s backup last year and logged some time when Crossland was injured.

That is not the case.

Rowland is slated to be the Knights’ #1 receiver, coming off a 2016 where he scored six receiving touchdowns. Incoming juniors Spencer Brasch and Austin Godfrey are in contention for the starting quarterback job. They both throw the ball well and either player could be considered for a safety position on the defense this season. They are that athletic. Throw in the Gatorade Player of the Year Draycen Hall, fellow burner James Mageo and an offensive line that returns four of its five starters, and it looks like the Knights are loaded up on playmakers again.

Junior Austin Duffy was a very efficient 22 touchdowns and 10 interceptions, but will not return to the Red Mountain football team as a senior. Duffy is focusing on baseball full-time moving forward and is committed to New Mexico State to play baseball. New head coach Mike Peterson said it is an open competition to run the Lions offense that is continuing to be adjusted. Whoever is under center will have playmakers like Lance Lawson, Shaq Daniels and plenty of other weapons.