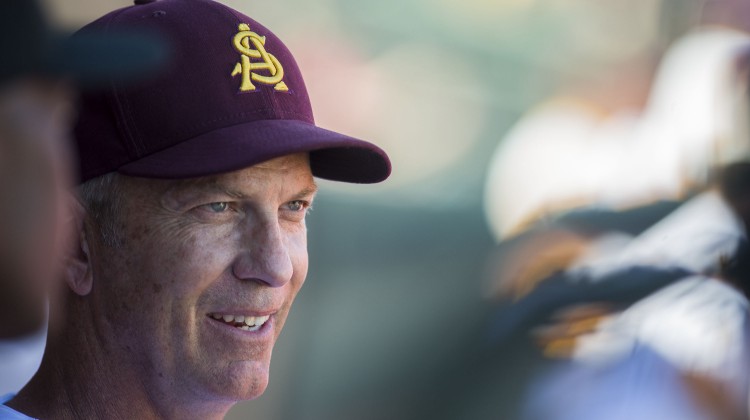 Statistically, this may be the worst season Arizona State baseball has ever experienced.

After this past weekend’s series, which marked the first time ASU was swept at home by rival Arizona since 1989, the program has now seemingly suffered all the blows a season can throw. Its nation-leading streak of 54 seasons with 30 wins or more was snapped at Washington two weekends back. This past Friday, the Sun Devils loss sealed just the second losing season since the varsity era started in 1959, and its first since 1985.

Not to mention ASU was mathematically eliminated from the postseason during its series with Stanford from May 5-7, and probably even before that. The last time the Sun Devils missed the postseason was in 1999.

Most fans seem to be angered, and for good reason. This isn’t the ASU baseball they fell in love with and it certainly isn’t the one they want to keep loving.

As any head coach would, Tracy Smith always talks about the bigger picture that he thinks needs to be seen. A larger perspective is necessary. Fans of a program with as much success historically as ASU want instant success, but sometimes sports don’t work that way.

Valid point, though I do believe keeping the 30-win streak alive is important. Other teams in history have been close to breaking it, primarily the 1985 team (31 wins) and then 1992 team (32 wins). But all have surpassed 30, which is perhaps the program’s greatest sign of sustained success.

Additionally, to add to the program’s 22 College World Series appearances, winning more than 30 games will mathematically be a must.

Multiple times, Smith has told the same story about when he took the job. When he spoke to ASU Vice President for Athletics Ray Anderson and other administrators, he pointed to year three as the difficult transition year.

But on the same token, I always ponder why he was able to point to a specific season years away and say it would be difficult. After all, ASU baseball seemed to be doing just fine. Tim Esmay — Smith’s predecessor — made an NCAA Regional in every year of his tenure but 2012, the season ASU was banned from the postseason due to former coach Pat Murphy’s doing.

ASU baseball may have needed a “retool” or “reload,” but I’m not sure if a “rebuild” was necessary.

Let’s now look at this season. The Sun Devils weren’t as strong in non-conference play as they had been in Smith’s first two years. This season, they lost four in a row at one point. They also have just eight conference wins — three against lowly Washington State — as they haven’t been able to overcome the 1-5 start in the Pac-12 slate.

The biggest issues have been pitching and defense. ASU’s 63 errors are the third most in the conference and its 5.49 team ERA ranks dead last. Part of the latter may be due large in part to the lack of a pitching coach as Brandon Higelin was relieved of his duties about a month before the season started.

Weird timing, but Smith has said that his mindset is, “if something is broken, it needs to be fixed.” The pitching needed to be fixed and still does. I’m not sure the move’s timing was ideal, but nonetheless, Smith has been the head coach and pitching coach this season.

ASU had standout arms like Ryan Kellogg, Brett Lilek and Ryan Burr during Smith’s first year in 2015, all of which were drafted as juniors and are in Major League organizations. Last season, Seth Martinez stole the show and was drafted.

Junior left-hander Eli Lingos has taken a huge step forward from 2016, but righty Eder Erives didn’t have the senior year many expected from him. Connor Higgins has had a promising 2017 out of the bullpen and left-hander Chaz Montoya has looked good for the most part during his freshman campaign.

Smith arrived, there has seemed to be a lack of development and a ton of inconsistency in ASU’s pitching staff.

With the bat, ASU ranks sixth in the conference in runs scored (263) and batting average (.273), and third in hits (484) and home runs (36). Those numbers suggest that if this team had a few more reliable arms in its staff, it would not be sitting at 23 wins with just one series left. In fact, I think it reaches and exceeds the 30-win mark.

Let’s give Smith credit where it’s due, though. He pulled in the No. 1-ranked recruiting class and those guys have looked good this year.

Those are Smith’s guys, and they’re already making an impact. Additionally, sophomore outfielder Gage Canning has exploded this season. His .336 batting average leads the team and he has 12 doubles, eight triples and a team-leading six homers.

“I’m so excited to build our team next year around that kid.”

Canning isn’t Smith’s recruit. But according to ASU assistant coach Ben Greenspan, Canning’s parents called the staff when Smith took over and asked if they still wanted Gage. Two years later, I bet Smith is happy he said yes.

There’s talent on this ASU team. If Smith can add some talented arms to the staff through recruiting, they could be even better.

But off the field, this season has been disastrous for the program’s image. Most notably, it had five departures in two days the week of the Stanford series. Three of those came on the day of a game

BREAKING: According to a source close to @ASU_Baseball, junior outfielders Andrew Shaps and Ryan Lillard have been dismissed from the team.

“I typically wait until after finals week to have those, but if a kid wants to know where he stands, I feel it’s my responsibility as a head coach to give your honest assessment,” Smith said the day of the latter three departures. “If I’m parent on Division I athletes, that’s all I would want. Tell me where my kid stands because then you can make decisions based on that decision

Additionally, Sebastian Zawada, best-known as a power hitter, left the team mid-season to pursue independent baseball. Daniel Williams, an outfielder, was dismissed prior to the season.

Departures may be normal in college baseball, but they’re alarming when they happen at this rate. Even if players don’t have their ideal role or amount of playing time, they may still stay if they enjoy the program culture.

After Arizona completed the sweep of ASU, Smith was asked about his team’s Dominican Republic trip from back in December. It seems what was supposed to be a team-building experience wasn’t what he had hoped it’d be.

For context, this is the first time Smith has opened up about the Dominican Republic trip. He also implied there was a lack of “buy-in” with some of the guys who departed this season.

“It’s a great thing because you learn about your team from a competitive standpoint because you’re playing, but you also learn about the cast of characters that you have,” he said. “Unfortunately, some of that stuff played out. …It was a good trip because that was the first time we actually saw some adversity, guys failing.

I just finished my junior year at ASU. I started covering this team as a wide-eyed freshman and am finishing up my third year on the beat. Looking back at the 2015 team and comparing it to the squads last year and this year, I always wonder how that group didn’t make it out of the Fullerton Regional.

The point is, the talent on that year’s team mirrors the kind of talent ASU has now and what it can be when its current freshmen and incoming freshmen develop. The potential is visible with the personnel in Tempe and those arriving next year.Unlike last year, the Sun Devils won’t get smashed in the MLB Draft as their most-touted draft prospect was Shaps and he was dismissed regardless.

The day of the three departures, Smith told the media a story. He was speaking at a breakfast club event with season-ticket holders and various administrators when he read them three emails he had received. Those emails were the “most brutal, derogatory, negative” ones imaginable.

Once he read them, he noticed a shocked crowd because of the nastiness they entailed. But the punch line was coming.

His point: He has done this before. This is his third time dealing with “trusting the process.”

But this one is a different animal. This one has five national championships and demands more.