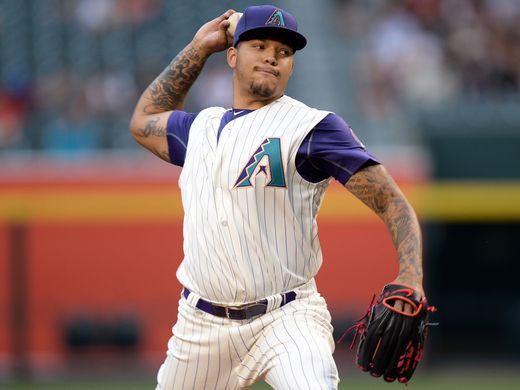 When Arizona Diamondbacks pitcher Taijuan Walker was drafted to the Seattle Mariners in 2010, he was right out of high school and still had a lot to learn about the game of baseball.

The following spring, Walker met a coach who would end up having an immense impact on his career, and that was current Grand Canyon University pitching coach Rich Dorman.

At the time, Dorman was a pitching coach for the Clinton Lumberkings, the Single-A affiliate of the Mariners.

“We just kind of created a really good relationship from there,” Walker said. “I was real new to pitching, and he really taught me a lot about how to pitch and how to go out there and compete.”

For much of his baseball career prior to being drafted, Walker was both an infielder and a pitcher.

“The thing about Taijuan, his ceiling was so high when we got him,” Dorman said. “He was raw, a shortstop that kind of got on the mound and threw, so he didn’t really know much about pitching.”

“He was just a little kid when I first met him,” Dorman said. “His stuff was good. You could tell he wanted it really bad. He was humble, you know most first round picks kind of have a little ego, but Taijuan was ready to learn.”

I'm excited to put on a @Dbacks uniform and get started!! How many more days until spring training?

Dorman and Walker clicked during their first bullpen instructional league together, Dorman said.

“I felt like he trusted me,” Dorman said. “He knew I believed in him right away. I felt like it was easier for him to talk to me and it was easy for me to talk to him. We kind of just understood each other really well from the get go.”

Walker made his big league debut with the Mariners in Aug. 2013. He bounced between Double-A and Triple-A for much of the ’13 season and part of the ’14 season, before spending most of ’15 and ’16 in Seattle.

In July 2016, Dorman was named as the pitching coach for the Lopes. In November 2016, Walker was traded to the Diamondbacks, reconnecting the two here in Arizona.

“Being on the road or being in Seattle, I wasn’t able to come see him if we needed to make some adjustments,” Walker said. “I know if I want to work on stuff he’s going to be there for me.”

Since Walker arrived in Arizona, Dorman has found himself rooting for the Dbacks.

“I’m not gonna lie, I’m more of a Diamondbacks fan now than I was before,” Dorman said. “On my MLB At Bat app, I follow the Diamondbacks now just because I watch him and (make) sure he’s progressing, if he asks me questions I make sure I can see what he’s talking about.”

At the beginning of the the college baseball season, Dorman asked Walker to throw out the first pitch at the Lopes’ season opener.

“I reached out to him to come out and throw out the first pitch, just for him to kind of get in the Diamondback nation, get these people excited about him because he’s a great talent, they got a really good pitcher.”

Thursday night against the Padres, Walker had one of his most dominant starts of the season. He pitched eight innings, allowing only two runs on four hits with one home run, no walks and 11 strikeouts, matching a career high. The last time a Diamondbacks pitcher had a similar start was Randy Johnson in 2004.

.@tai_walker was throwing it back on #DbacksTBT. To the back of the catcher's mitt, that is. 🔥 pic.twitter.com/bG6JKiOQxU

Walker’s early success this season is no surprise to Dorman.

“He trains well, he knows what his job is,” Dorman said. “He learned it through every step. He’s ready to embrace the big league role and be a star.”