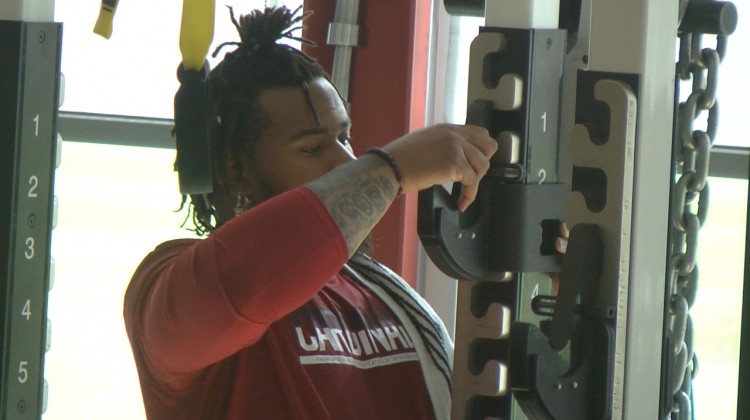 “Today was a very business-like atmosphere,” the animated Morris told the assembled media after the first sets of lifting. “It’s good to have them back in the building. We’ve been chomping at the bit waiting for this day…but I will say this now, we’ve got some work to do.”

#AZCardinals going through their volunteer workouts here in Tempe. 🏈💪🏻 pic.twitter.com/ajqbTQWCvO

While the Cards are bulking up, they’re also building a unity working together to become better as a group, hoping to wash away the sour taste left behind by an extremely disappointing 7-8-1 2016 season. The first “voluntary” workout was well-attended, including newcomers like safety Antoine Bethea, as well linebackers Karlos Dansby and Jarvis Jones.

“Thing about our locker room, we always have over ninety percent of guys who are participating in off-season workouts,” Pro Bowl cornerback Patrick Peterson explained. “We have leaders that guys follow and guys take notice of that. At the end of the day all we can do is pass on our knowledge. Show these guys how to get better.”

Everything’s lined up for the taking. pic.twitter.com/xk4hoBrMAH

The spring work ethic and advice passed along by Peterson, as well veteran mainstays like Larry Fitzgerald and Carson Palmer go a long way for younger players looking to gain any advantage or tips before the grind of training camp and the regular season in the coming months.

The message is quite clear.

“I wouldn’t let those guys be there without me,” third-year tackle D.J. Humphries said with a grin. “If everybody is going to be in the building, I’m going to be there with them. Optional is mandatory. If there’s an opportunity to get better, we’re going to be here getting better.”