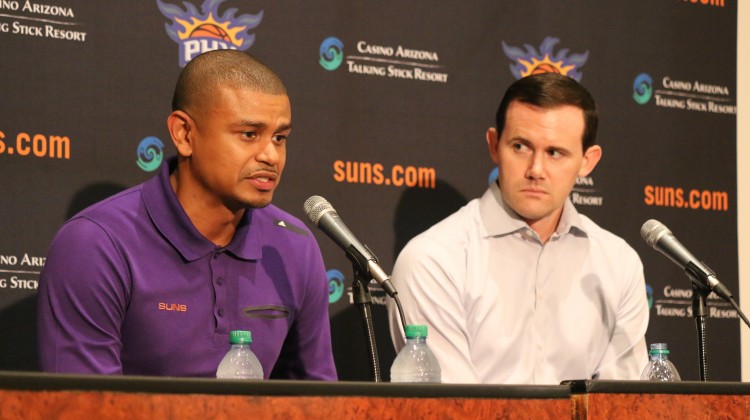 Final Four week in our little slice of heaven could become more Madness in March. If the stars align, could we have the University of Arizona playing in Glendale and the Suns searching for a new head coach at the same time?

UCLA gets bounced from the NCAA’s, Steve Alford leaves the Bruins for Indiana, Suns head coach Earl Watson leaves Phoenix for Westwood and our hometown NBA heroes are left searching for a new bench boss. Unrealistic? No. Improbable? Hardly.

Respected ESPN basketball analyst Jay Williams went on a national radio show to connect Watson to the Bruins opening. He’s not one to throw stuff up against a wall to see if it sticks.

All Watson has to do to kill off this report is lean into an open mic today, tomorrow or next week and say “I am not going anywhere!! I am going to continue to be the head coach of the Phoenix Suns as long as Robert Sarver and Ryan McDonough want me to be. We have a great nucleolus in place and I’m excited for what the next few years will bring us here in Arizona.” That’s all that he has to do. The longer he doesn’t, the more the speculation will grow. He can take his name off the rumor mill, just like John Calipari did at Kentucky on Wednesday by agreeing to a new contract.

If UCLA looses this weekend in Memphis, the story will revolve around Watson and the Bruins. If UCLA advances to the Final Four, then next week many of my Valley media brethren will be put on Alford/Watson watch.

If I am Watson, I’d take the UCLA job and leave Phoenix. His affection for the Bruins has never been in doubt. It’s a better job today than the one he currently has in downtown Phoenix. The Suns have put some nice pieces in place, but once again they are left to tanking games and aiming for the Lottery. There MAY be a payoff in Phoenix in two or three years, but nothing about this franchise has been certain. From a distance, I think Watson would make a terrific college head coach. His affinity for the late John Wooden and the people who have impacted his life would make it easy for him to sit in the living rooms of the best high school players in the country. How often does THAT job come open? To me, he should run to it. Who could blame him?

The Madness of March may not have reached a crescendo yet in the Valley sports scene.