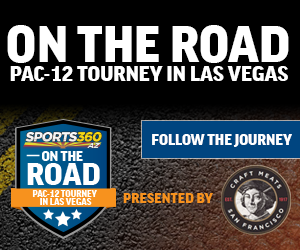 -Arizona State was eliminated by Oregon in the second round of Thursdays Pac-12 Tournament, 80-57 here in Las Vegas. Trailing 34-31 at the half, The Sun Devils couldn’t put the ball in the basket to start the second half. Oregon went on a 12-2 run to put the game away and coast to the victory.

-Torian Graham would lead Arizona State in scoring with 32 points.Graham would make 12 of the Sun Devils 19 made field goal attempts. Not the best way to spread around the scoring. Tre Holder and Kodi Justice were a combined 2-20. Fatigue from playing the Overtime game the day before was clearly a factor.

-Arizona State Director of Athletics Ray Anderson joined me on Thursdays show and spoke at great length about the job that head coach Bobby Hurley has done and the future of Wells Fargo arena and scheduling. it’s worth the listen at the 39:00 minute mark.

-With the loss, Graham and Obinna Oleka have completed their eligibility at Arizona State. Three starters return next season. Tre Holder, Shannon Evans and Kodi Justice.