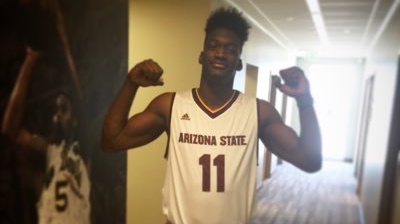 The clear priority for the Arizona State basketball team was to add to the Sun Devil front court. While forward Obinna Oleka was seeing the bulk of the minutes as a big and Ramon Vila in a reserve role. Freshman Jethro Tshisumpa served a suspension towards the end of the season for a rules violation, the Sun Devils needed size.

On Monday, they helped address that problem with the commitment of 6-foot-10 center De’Quon Lake. Lake comes from the Iowa Western and will have two years in Tempe. He is coming off a 13 point per game and seven rebound per game season.

The Sun Devils front court will have a new look next season with Oleka graduating, but hope to have Andre Adams and Vitaliy Shibel in the rotation after coming off an knee injuries, Tshisumpa and Villa in expanded roles, plus 6-foot-7 Mickey Mitchell, who transferred from Ohio State and will be eligible in the second semester of the season.

Class of 2017 Adding to the Sun Devil Front Court

The 2017 class brings in a few bigs in Lake and high school center Kenny Wooten, who stands at 6-foot-8 and 205 pounds.

This is the fourth commitment of Arizona State’s 2017 class, joining Wooten and four-star recruits Kimani Lawrence and Remy Martin, who are both Scout Top-100 recruits.