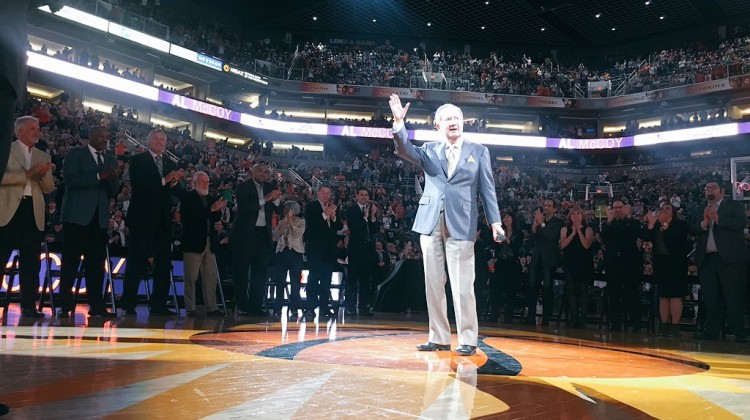 I hadn’t been back to Talking Stick Resort Arena for a Suns game since I left the organization almost a year ago. I knew it’d be like a high school reunion. Things felt familiar yet awkwardly different and inevitably some of your favorite people you grew closest to would no longer be there. Breaking the streak and coming back Friday night was well worth it for one reason and one reason only, Al McCoy.

Suns vs. Thunder was the under-card of the evening and it was obvious the main event for most in attendance, present company included, was the induction of McCoy as the 15th member of the Suns Ring of Honor. It was an event that, as a worshiper at the altar of Shazam, I couldn’t miss.

Suns Managing Partner Robert Sarver opened the ceremony off by giving Al a nice introduction saying if anyone deserved to be in the Ring of Honor it was him. Former Sun and Al’s broadcast partner for the past 15 years, Tim Kempton, continued the festivities with a nice speech about what a privilege it is to share the broadcast booth with Al.

Suns great Charles Barkley was next and brought the same wit and honesty he did as a player thanking the fans first before honoring Al.

“To the fans, I ain’t never leaving Arizona,” the former MVP said to a rousing ovation from the crowd. “When I got here in 1992 I didn’t know what to expect. You opened your hearts to me.”

While Chuck’s comments were nice, the most touching moment of the evening was when Al’s son Jay took the mic to honor his father telling the Suns legend that he was a true MVP, most valuable parent.

For Al’s speech I was lucky enough to have a courtside seat — don’t ask how I pulled it off — and it was a truly unique perspective. As McCoy was introduced everyone, media included, gave him a standing ovation prompting him to give Sir Charles a hard time by delivering the funniest line of the evening.

“Charles, I told you I was going to get a bigger round of applause than you,” McCoy said with his signature Iowan charm before mentioning he had been in Arizona longer and certainly wasn’t going anywhere.

Throughout McCoy’s speech current Suns Alan Williams, Derrick Jones Jr., Marquese Chriss, Devin Booker and Eric Bledsoe watched the ceremony just feet in front of me. If you want to know the kind of impact Al has had in Phoenix, all you had to do was watch them. Despite having a second half to play that was just minutes away, they hung on McCoy’s every word. Quite the accomplishment for someone who is six decades their elder.

The moment of the night came when Al looked at the crowd and delivered a heartfelt message.

“If you will continue to accept me and if God keeps smiling on me, I’m just going to keep going.”

As the roar of the crowd began to build, Devin Booker sprung up from the seat in front of me leading his teammates in a standing ovation and an emphatic round of applause. It was the perfect culmination as the Suns’ past and its future shared an almost perfect moment. The youth showing the ultimate respect to their elder.

While we know Al will continue to broadcast games, a point his previously mentioned comment hammered home, it was time to recognize him with a spot in the Ring of Honor. It would have been a tragedy to have waited too long to where the fans and McCoy couldn’t share the beautiful moment they had on Friday night. A moment that it was obvious touched the Suns broadcaster.

Al McCoy is hands down the greatest Sun of all-time and the fans honored him as such at Talking Stick Resort Arena as he took his place among the franchise’s greats. I’m just glad I was lucky enough to be one of them.