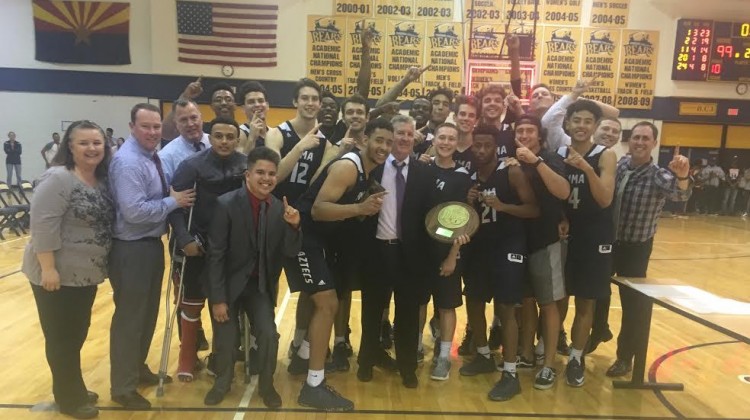 The first half belonged to Southwestern as they nailed nine three-pointers to take a 35-19 lead forcing the Aztecs to call timeout with 4:48 left in the half.

Coach Brian Peabody said the zone they were running wasn’t doing too much and that they “should’ve stayed in man.”

However, Pima showed signs of life as they went on a 16-3 run to pull within three to make the score 38-35 at the half.

“It seemed like every three they shot went in,” PCC Captain Jacob Anastasi told Sports360AZ in an interview. “We made some adjustments and started playing man and that got us back into the game.”

The momentum carried into the second half as the Aztecs tied the game behind a three-pointer by sophomore guard, Emilio Acedo.

Southwestern would again take the lead but not for long as the second half totaled seven ties and eight lead changes.

“We had guys pick us up on the bench with some of our starters in foul trouble,” Anastasi said. “We were able to get some stops which lead to points.”

No. 1 ranked Southwestern walked away with this victory but Pima can keep their heads held high as they look back on this historic season.

Let’s look back at some of the history made:

“We have a very skilled group of returners and redshirts for next year to go along with the recruiting class Coach Peabody brought in,” Anastasi said. “Pima has a really good chance of repeating what we did this year, if not more.”

These were earlier stories that Liam Morales published on Pima CC.

On Tuesday, the Aztecs defeated Waubansee Community College (IL), 93-84, in what was a commanding performance throughout.

This is the first time in the programs history that they have made the Elite 8 making this historic run something to marvel at.

Pima head Coach Brian Peabody believes dealing with adversity was the key to their team’s victory.

“I think our team dealt with the adversity of the foul trouble the entire game,” Peabody said. “Different guys played their role and stepped up in crucial spots.”

In the second half, sophomore Emilio Acedo had 14 points including a three that started a 14-4 run giving the Aztecs their largest lead of the game, 54-36 with 16:03 remaining.

Sophomore Deion James finished with a game high of 31 points in 23 minutes. He went a perfect 13 for 13 from the line and finished the game shooting 66% from deep.

“They played a similar defense to Mesa; who we played in our conference,” Anastasi said. “They kind of over helped so the drive and kick was open for us.”

As of right now, Pima is the only team in the Elite 8 who was not ranked in the top 20 in the 2016-17 NJCAA Division II Men’s Basketball Rankings.

“I think people overlooked the strength of our schedule,” Peabody said. “We played against the top teams in the entire country, DI not DII, I think that’s really helped us. Our guys aren’t afraid of anybody.”

The Aztecs will have a break on Wednesday but come Thursday their hands will be full as they take on No. 1 ranked Southwestern Community College at 1:00 p.m. (CDT); 11:00 a.m. (MST).

With Pima ranking No. 1 nationally in scoring at 100.5 points per game, Southwestern only sits 4 spots below them at number five with 94.2 points per game.

“We have the height advantage over them,” Anastasi said. “I think it’s going to be a high scoring game so if we get out running, which is our game, anything could happen.”

If the Aztecs defeat Southwestern, they will take on No. 7 ranked Parkland or No. 8 ranked Richard Bland in the Semifinals.

Pima believes that they have the pieces to make it all the way, including “the best player in the tournament.”

“If you’ve got the best player in the tournament, I think you’ve got a chance every game.” Peabody said about forward Deion James.

With that much confidence instilled in James’ mind its no shocker that he has already told coach Peabody that he will be returning next year despite the 50 plus offers he has received.

“Guys like the culture of Pima basketball,” Peabody said. “Unless the right offer came in, the kids (James) from California so if UCLA calls, obviously he’s going.”

Still, the focus remains on this year and winning the National Title.

“That’s the goal,” Anastasi said. “We are happy about the win yesterday but it wasn’t a big celebration… it’s just one down and now we have three to go.”

Here is the first story that was published by Liam on Monday.

Head coach Brian Peabody has led the Aztecs to a 21-11 record behind a lethal offense that leads the nation with a scoring average of 100.8.

The trip to Danville was made possible when the Aztecs upset eighth-ranked Phoenix College behind a combined 54 points from a pair of sophomores, forward Deion James, and guard Emilio Acedo who each poured in 27 in the win.

“It’s a big honor and huge accomplishment for our program,” Peabody told Sports360AZ.com in a interview Monday morning. “It feels really good knowing where we started… it’s been a lot of hard work and it finally paid off.”

Heading into the tournament Peabody has seen confidence in his players and told them to stick to their motto: Don’t Be Scared.

“It doesn’t matter where you play, you’re going to be nervous,” Peabody said, “But once that ball goes up, your nerves go away.”

The road to the championship game won’t be easy.

If the Aztecs advance to the second round they will have to take on No. 1 seeded Southwestern CC (IA).

Peabody believes if anyone is up for the challenge, it’s his team because they have character.

“I cut two kids earlier in the season because they couldn’t follow the rules,” Peabody said. “We are only going to recruit high character kids.”

“That doesn’t just happen for no reason,” Peabody said. “That’s really impressed us, I think it’s the type of kids we are recruiting and attracting.”

Coach Peabody and the Aztecs hope to add to their historic academic season with one prize: A National Title.