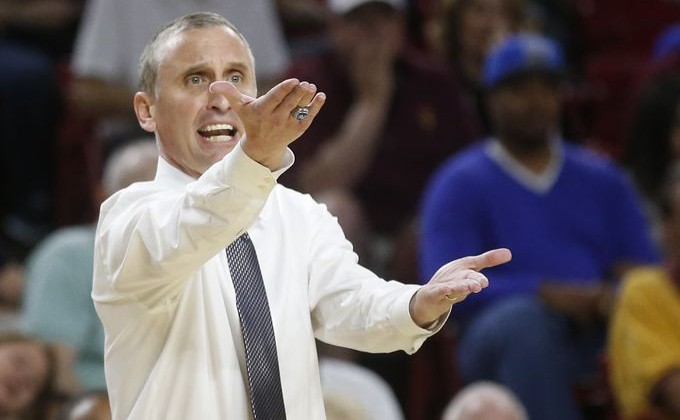 Arizona State head coach Bobby Hurley is no stranger to Final Fours. As a player at Duke, he played in three of them and was named the 1992 Final Four Most Outstanding Player.

With the Final Four in Glendale this weekend, Hurley shares his thoughts on the quartet of teams vying to cut down the nets Monday night at University of Phoenix Stadium in Glendale. He joined Sports360AZ.com’s Brad Cesmat earlier this week.

Biggest surprise of the field? “Clearly, it’s got to be South Carolina. They’ve earned it. They’ve played some really good teams but they haven’t been a household name this year.

They’re a good team, but they’re not at a top-level. They’re really playing well at the right time and their coach Frank Martin has done a really good job of getting his team to defend and play hard at that end of the floor.”

How do you see Oregon-North Carolina? “I think North Carolina is going to focus on throwing the ball inside, also. They’re deep on the front court with really good size and Oregon is going to look to probably attack more off the dribble.

🎧 See, the power of the mind is not a joke
Man, I said that I would do it and I did 🎧 #FinalFour Practice Flow 💯#GetIntoIt #GoHeels pic.twitter.com/WXBEtHP5n3

Jordan Bell is the guy who going to have to play the way he did against Kansas [in the Elite Eight], with his rebounding and shot blocking against that North Carolina front court.”

Are you surprised Oregon made it this far without their inside presence Chris Boucher? “I completely understand the impact Boucher has. He’s special with his shot blocking ability and his ability to stretch the court out with his three-point shot so losing a guy like that, it’s hard to replace. But they have enough good players, they have enough talent…I’m not surprised with where they are right now.”

Is it a big advantage for UNC that Roy Williams has coached in a handful of Final Fours? “All these coaches are very experienced and have coached in NCAA tournament, won games in the tournament. This will be their first Final Four experience but all of these coaches have done it at a very high level so I think that is a little overrated. I just think it’s about keeping their teams focused. There’s a lot going on here, there’s a lot of distractions. It’s an exciting environment. Get your team focused on winning a basketball game and not just being happy that you made it this far.”