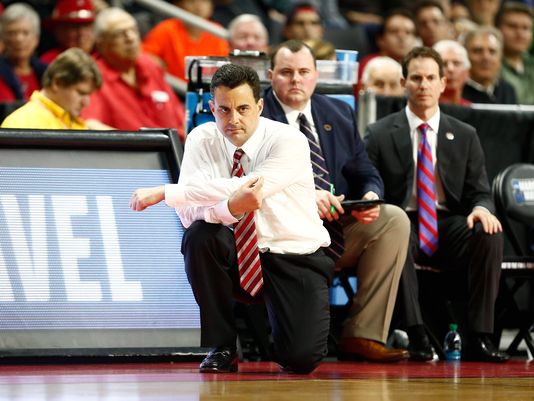 Arizona should be playing in the Final Four. No April Fools joke. The April 1st National semi-finals at Glendale should have the Wildcats taking the floor. Sean Miller has coached in 26 March Madness games, he’s never had a Final Four game on his Arizona resume. Miller has Lauri Markkanen, a future NBA Lottery Pick. Miller has Alonzzo Trier, the MVP of the Pac-12 Tournament. Miller has a good mixture of size and depth on his roster. There’s NO excuse for Sean Miller to “miss” with this team. The expectations of the Arizona Wildcat fans SHOULD be over the top. They SHOULD be expecting Miller to do something that only Lute Olson has accomplished in Tucson.This is the 20th anniversary of Olson winning the NCAA Title. It’s a program with a rabid fan base that hasn’t made travel plans for the third and final weekend under MIller’ reign.
Look at the West bracket that Arizona has been given! Do you see title winning programs like Duke, Kentucky, North Carolina or Louisville lined up opposite of the Wildcats? No.
Gonzage beat Arizona without Trier back in December. That game doesn’t matter now. When the Wildcats run over North Dakota and the winner of VCU v Santa Clara, what will Miller have accomplished? Not much. His program is flying to Salt Lake to bludgeon two programs by 15-20 points.
All the pressure of this tournament should be on Miller to finally break his stretch of not getting to the Final Four. He and his staff have built an extremely talented program, however, NO ONE should expect anything less than a Arizona appearance in Glendale.