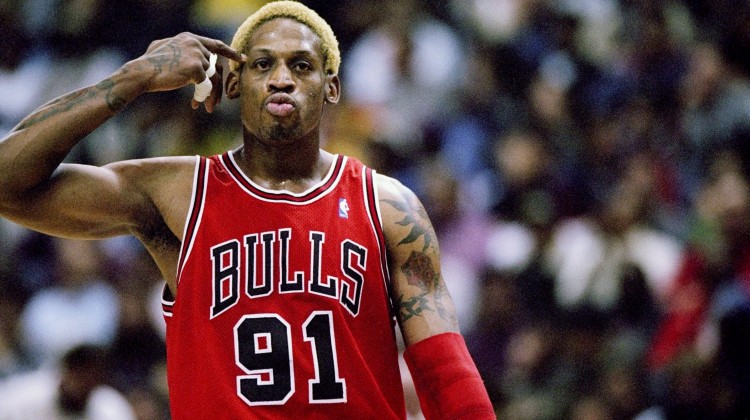 Cue up Adele, because rumor has it the Phoenix Suns are in talks to trade for disgruntled Sacramento Kings big man DeMarcus Cousins. Exciting, right?

The problem is this time of year in the NBA, as well as the offseason, it is basically the equivalent of high school study hall. Lots of rumors but very little actual work gets accomplished. Sure, plenty of teams “talk” but it’s the equivalent of you tweeting a pickup line at Kate Upton. You’re not going on a date but you technically “talked” about it.

While I wish this were a piece that quoted a million clandestine sources suggesting that Al McCoy, the Gorilla and Devin Booker are part of a four-way deal that’ll bring back the Statue of Liberty, the Hollywood sign and Paul George, it’s not.

Instead it’s time to introduce the first ever Purple Reign Power Poll. Don’t worry, this isn’t your typical mundane ranking. No, instead these will be off the beaten path Top 5 list that only true Suns fans will appreciate.

So without further ado, here’s the Top 5 Suns Rumors That Never Happened.

No.5 : Alonzo Mourning AKA the Missing Center

Growing up as a Suns fan in the 1990s you probably remember the Suns constantly being rumored to be so close to acquiring an all-star center. This was in the time after Oliver Miller ate himself out of the league and (insert has been or never was) was ready to step in and be the Suns big man next to Charles Barkley.

Alonzo Mourning was a young all-star center in Charlotte feuding with the other young star on the team Larry Johnson. Everyone put two and two together assuming the Suns and Johnson would be a fit. The smoke never turned into fire but a trade did prove there was Heat, of the Miami variety, in Mourning’s future.

In the Summer of 2004 the Suns were coming off a 29 win season and looking to make some big waves. With the No. 7 pick in the draft and some young pieces the Purple Gang led by Bryan Colangelo’s front office expected to land a star.

Initially many expected said star to be Tracy McGrady from the Magic. While urban legend has it that the deal was so close that they even had elements ready for an announcement, it never came to fruition as that pick wound up with the Chicago Bulls in the form of Deng. The star the Suns landed? Only two-time NBA MVP Steve Nash.

Have to wonder just how close Seven Seconds or Less was to never happening.

No. 3: Scottie Pippen, if You Can’t Beat Him Join Him

The year is 1998 and the Suns are still trying to shake off the hangover that was the Post-Barkley Era. With a glut of point guards — hmm, sounds like a common Suns theme — in the form of Jason Kidd, Kevin Johnson and Steve Nash and not a lot else, the team was looking to land a big name.

This time the rumor wasn’t a trade but rather the lack of a trade in order to land a big name free agent. That big name free agent was Scottie Pippen. The Suns swung and missed as the Bulls star wound up in Houston and Phoenix was left being locked out of the Nuggets arena as Denver stole Antonio McDyess. Oh, the good old days.

No. 2: The Worm Almost Turned His Way to Phoenix

After losing to the Chicago Bulls in six games in the 1993 NBA Finals — PAXSON!!!! — the Suns brass was looking for a way to make a big splash. Michael Jordan was gone on a gambling susp– chasing his baseball dreams and Phoenix’s window was wide open.

But who would they add to the front court with reigning MVP Charles Barkley? The plan was league leading rebounder Dennis Rodman from Detroit. The Valley of the Sun was Rodman’s “first choice” according to then Piston’s GM Bob Bass.

The deal was agreed upon until Bass and Detroit found out Richard Dumas, the key piece from Phoenix, couldn’t keep his nose clean and was in the NBA’s substance abuse program.

No. 1: Seven Seconds or Less Almost Got Their Big Ticket to the Finals

It’s 2007. Steve Nash and Amare — I’m not putting the apostrophe because he never earned it — Stoudemire are at the peak of their power. It’s clear Shawn Marion’s time is winding down and the Suns are looking to reinvent the SSOL team to finally make that elusive NBA Finals and hopefully win it.

Enter Kevin Garnett. The Suns agreed in principle to a three-team deal that would send the aforementioned Marion to Minnesota in exchange for KG. The hang up? Marion refused to go to the land of 10,000 lakes because they refused to pay him the max deal his ego so greatly coveted.

The deal blew up. KG goes to Boston as part of the Big 3, Shaq winds up in Phoenix as part of the big mistake, Marion got his money and the Celtics won a title.

One can only wonder how much of the NBA changes if KG winds up in Phoenix. The first Big 3 becomes Nash, Stoudemire and KG. Phoenix likely has a title. Boston and Ryan McDonough don’t win theirs… oh what could have been.

So the lesson from all of this? Take everything you hear the next few weeks with a grain of salt so big that it could flavor the popcorn you’ll need to enjoy all these rumors for years to come