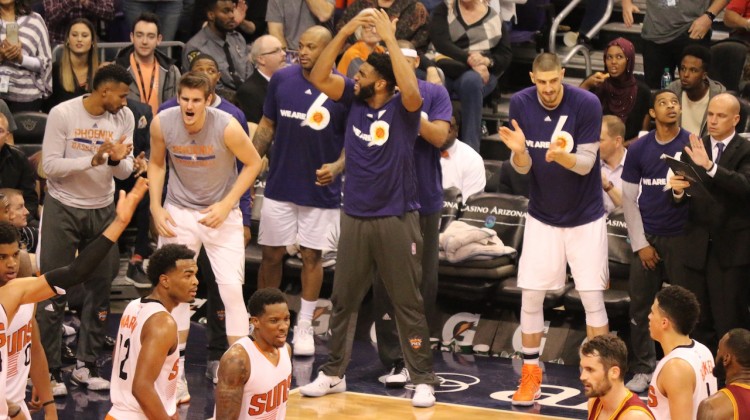 Where are the Phoenix Suns heading?

That was the last time the Phoenix Suns were in the playoffs. That’s right, the Purple Gang From PHX hasn’t seen the postseason since before Devin Booker set foot on a high school campus. He was 13.

The rebuild has now seen four head coaches, two GMs, seven lottery picks and the hiring and departure of a President of Basketball Operations. Despite all the change, the result has seemingly remained the same. In year seven of the rebuild the Suns roster now has the most upside of any in recent memory and general manager Ryan McDonough and his staff have positioned the team with one of the most intriguing rosters in all of the league. So much so that Kevin O’Connor of The Ringer decided to spend some time around the team for an in-depth feature on the franchise and it’s future.

While the piece seems to have left Kevin with as many questions as answers — and we highly recommend you go read it — we here at Purple Reign decided we should get to the bottom of just what he thought of the Suns.

Purple Reign: The Phoenix Suns are the second worst team in the NBA right now and it’s not clear where they’re heading. What made them an appealing national story in your mind?

Kevin O’Connor: I see something good happening with the Suns. Ryan McDonough has made mistakes. That’s obvious. The Isaiah Thomas trade is something no one will forget. But at the same time, you have to move on in life and in sports when mistakes occur. You have to learn from it.

PR: You spent time around Earl Watson and Ryan McDonough for the piece. They both talk a lot about culture and building a system like the Spurs. In your assessment, do you think it’s a genuine well thought out plan or more lip service?

KO: It’s definitely genuine. I’s like Bill Belichick once said: “Talent sets the floor, character sets the ceiling.” The Suns follow that mantra and not all organizations do. The difficulty is making it a reality.

PR: In the feature you refer to Eric Bledsoe as a V4 and say the Suns need a V6. What do you think the team could potentially get back in a deal for him and, if you were McDonough, would you pull the trigger on a deal involving him before the deadline?

KO: I don’t know what the Suns could get back but Eric Bledsoe certainly has a very team-friendly contract. I’d listen to offers for Eric Bledsoe if I were the general manager because I don’t view him as part of the future core. He’s the only player on the team younger than 30 but older than 25. He’s caught in-between.

PR: Do you think the Suns will be able to remain patient and build through youth or will give in and deal for a more established player?

KO: Both. Keep being patient but retain the ability to be reactive to opportunities that may present themselves. That’s what all the best organizations do.

PR: What was the one thing you wish you had included in the piece but wound up on the cutting room floor?

KO: I wish I had included this quote by Ryan McDonough: “You can patch together and be decent and maybe even a little above average and maybe make the playoffs every year, every other year but have no chance to win a championship. But sometimes to get to that level you have to take a step back and be patient and be realistic.” What a lot of people don’t realize is that a championship isn’t the goal for every organization. I don’t want to pinpoint any teams since it’s unfair to say. But just look at the personnel decisions these teams make that keep them floating, wasting years away in the middle. Sure, they might make the playoffs, but that doesn’t mean they’re closer to a championship. For example, the Hornets might be 24-29, but I’d argue the Suns are much closer and better built for a championship. It doesn’t mean they’ll get there, but I think what they’re doing is the right approach.

PR: Is there a recent team you’d compare the Suns rebuild to?

KO: It’s impossible to say. McDonough has clearly learned a lot from Danny Ainge’s rebuilding style. So the mid-2000s Celtics. That team could’ve stayed young had they not traded for Ray Allen and Kevin Garnett. Maybe the Sixers, though that was a unique situation. The Suns are just young, so there’s a difference.

PR: After being around the team, what phrase would you use to describe the Suns future?

KO: Trust the Process, though that’s good all around life advice.