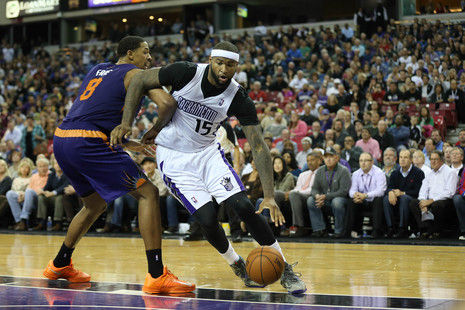 Welcome to the Solar Panel. A gathering of some of the most unique minds discussing topics from around Planet Orange (if that’s still a thing). These media members and super fans will breakdown the hottest topics about the Phoenix Suns. Here’s this edition’s panelists:

1) DeMarcus Cousins trade rumors have surfaced for the Suns. Is Boogie the star the Suns have been waiting to trade for or is he too big of a risk?

Adam Joseph: He certainly could be. The Kings are very widely known to not be keen on moving their Franchise star, but I think Cousins has shown steps forward in his development and the organization has spoken of improvements. Cousins is an All-NBA talent with MVP caliber type play on a good team. The Suns have the assets, but whether they are the right fit remains to be seen. I think with their growing core they can afford to be patient, there’s no rush to push the boat out quite yet.

Tim Tompkins: Superstar talent is extremely hard to come by in the NBA, and as of late they’ve decided to cohort together on ‘super teams’. The Suns are bad, there is no way around it. However, the future is bright under that hot Phoenix sun. A budding star in Devin Booker plus young and unproven youth in Marquese Chriss, Dragan Bender and Tyler Ulis. TJ Warren shows promise as an offensive threat with a variety of ways to score, not including the three ball.

The question becomes what’s the Suns opportunity cost to get Cousins? Super star talent doesn’t come cheap. If the Suns give a package involving a collection of youth, not including Bledsoe or Booker, and two first rounders (this year’s and next year’s Miami pick), my vote would be to put the offer in the Kings court.

The Kings would want to package Rudy Gay in the trade as he’s suffered a season ending (and sometimes career ending) Achilles injury. Gay will likely opt in to that guaranteed money. Lawson is on an expiring deal and Knight would be his replacement.

Cousins is going to garner a max extension. Booker is going to get the max in 2019. Can a core of Cousins, Booker and Bledsoe make a team truly contend in a few years once GSW is past its peak? Perhaps, but only with the right defensive players around them.

Ann Meyers Drysdale: Anything in life worth going for is a risk. Everyone knows DeMarcus
skill & ability. And Maybe a change of scenery might be a plus. Bringing the Kentucky Kids together again and playing for a young Coach in Earl Watson.

Greg Esposito DeMarcus Cousins has MVP talent despite having, what those around the NBA I’ve talked to have called, a 10 cent head. He is immature, a bit of a hothead and has had so many cringe worthy moments with the media that you might as well nickname him Sean Spicer.

That said, despite many people and my own best judgement trying to talk me out of it, I see a lot of Charles Barkley in DeMarcus. It feels to me as if this could be the second coming of the deal that propelled the Suns to their success in the 1990s. If the price is right that is. What made the Barkley deal so great was that the Suns didn’t disrupt their core to get him. That’s the only way a deal for Cousins makes sense is if you don’t mortgage the future.

What I want to know is why know one is asking the most important question. Would Boogie be a top 3 all-time Suns nickname?

2) What is Devin Booker’s ceiling in this league?

AJ: Booker is an All-Star caliber of player, and I think that’s his ceiling. There’s All-NBA potential in there certainly, I mean only Melo, KD, Kyrie, LBJ, Shaq and Booker have posted his stat line as a 20 year old! If he can improve his efficiency over time and become a more capable defender, the sky is the limit when you have his sort of scoring talent.

TT: Devin Booker has the longest running 20+ point streak of any player at his age in the history of the NBA. He also takes more shots per game than virtually anyone in his draft class. He’s a volume scorer who hasn’t shown the ability yet to improve his efficiency (True Shooting percentage last year was .535%, this year it’s .529%). That being said, the second year guard is doing something not many in their second year players do; win games.

At this point we should not expect Devin Booker to develop into an elite defender, but if he can become a neutral defender, his ceiling is the second or third option on a contending team.

AMD: You are talking to the wrong person about ceilings. I do not think that there are “ceilings.” He can be as good as he wants and what his work ethic is, on both ends of the floor.

Espo: Devin Booker’s ceiling? The next evolution of Klay Thompson. An all-star caliber player who heats up so fast that he can scorch the net as if he were playing NBA Jam on Sega Genesis. He’ll never be THE guy but he’ll be the second star on a championship team. I find Booker’s floor just as interesting. His ability to score in droves reminds me a lot of Eddie Johnson. A volume shooter with no conscious. At worst, that’s where Book’s career heads. I’ll take even that.

3) Call your shot. Who finishes better, Booker in the Skills Competition or Derrick Jones Jr. In the Dunk Contest?

AJ: Booker. I think the fact Jones Jr is an unknown rookie is really going to count against him, and that competition is Aaron Gordon’s to lose. With other big names in there like DeAndre Jordan, it’s going to be hard for Jones Jr to make an impact. I’ll go with Booker.

TT: Derrick Jones- to put in perspective the hops and athleticism this kid has; he was accepted to participate in the dunk contest despite spending the majority of his rookie year in the D-League. That in and of itself says it all.

Espo: Call my shot? How’s this for a shot. Derrick Jones Jr. will join Larry Nance and Cedric Ceballos as Suns to win the Slam Dunk Competition and at least one of his dunks will include the aforementioned Devin Booker. As Tim mentioned, you don’t get invited to the dunk contest having played all of 3 minutes in the NBA if you aren’t an athletic freak that makes Cirque du Soleil look mundane.

4) Marquese Chriss won Western Conference Rookie of the Month for January. What’s impressed you most and least about his rookie season so far?

AJ: Has to be his athleticism right? He’s still very raw particularly on offense, but man that kid can get up! I think he has real potential in a modern NBA where athleticism is so highly valued and touted. His wingspan gives him defensive potential as well, which I’m always a fan o

TT: Chriss is able to shoot the ball, and shoot the ball well. He’s 58% around the rim, 46% from mid-range and an almost acceptable 31% from behind the three-point arc. Once he is able to iron out the glaring rawness on the court, he’s going to be a nightmare to defend.
Unfortunately, he needs to clean up the dumb fouls to stay on the court to be a contributing member of the team. Averaging 6 fouls per 36 is less than ideal.

AMD: His maturity and development in understanding the game. He has only played 5 years of basketball. He is a rookie at the 4 spot and has been playing the 5 as well. He doesn’t know players tendencies yet and is still learning how to play against them. He has been given confidence with his parameter play.

Espo: The most surprising has to be his rebounding. Coming out of Washington he was called one of the worst rebounders in all of college hoops. While he’s cleaned the glass like the generic version of Windex and not the real deal, he’s still shown promise with 14 games of 5+ rebounds. I’ll take it as a foundation for the future. What’s been most underwhelming has to be his awareness in terms of fouls. He makes Mark West look like he showed restraint on the defensive end of the floor.

Arizona high school football programs continue to adapt & prepare for the future of football as we reach the blistering summer heat. Programs now get closer to the season as the AIA released guidelines on Thursday detailing a safe return.