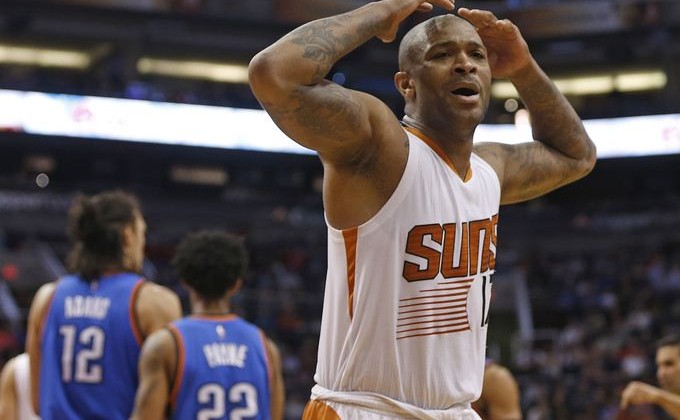 Tucker’s introduction to Phoenix was about as memorable as the record of some of the Suns teams he played on. Having played only 17 NBA games before reenacting the basketball version of European Vacation for five seasons, his arrival to the team was met with little fanfare. Alright, that’s an overstatement.

His introductory “press conference” took place in the smallest conference room at the the US Airways Center. The audience consisted of a handful of Suns employees, a single media member and a guy who could best be described as pretending to be an NBA general manager in Lance Blanks. P.J. dressed for the occasion, as in, he wore a white v-neck undershirt and a sport coat.

How do I know? Because I was one of those Suns employees crammed into what used to be the Paul Westphal conference room that’s now an office.

It’s hard to believe after such an auspicious start, four and a half seasons later, as Tucker returns to the city that his NBA journey began in, he leaves as a fan favorite and fashionista.

From word one, Tucker was a humble and hardworking guy. A blue collar player with a white collar taste for clothes and cars.

He came to Phoenix looking to make a name for himself and prove to everyone that he belonged in the NBA. Four Majerle Hustle Awards later and a reputation as an elite defender and Tucker has more than earned his spot.

His sense of humor was an underrated thing about Tuck. In his locker was a Ted doll that wore a Texas shirt and would say phrases from the movie. While filming a commercial for a local eye doctor with myself and other Suns employees he cracked jokes while we all had to read cheesy lines. He was a good sport too as he was always willing to take crap about his clothing as a guest of the post game radio show. Plus, how can you not like a guy who has enough of a sense of humor to allow a guy to nickname him The Garbage Man and was a fellow Charles Barkley fan?

P.J. wasn’t perfect during his time in Phoenix. He was flawed like the rest of us but he worked hard at every turn to earn the respect of the organization and his fans.

For my final game with the organization P.J. took the time out to record a farewell message for me that was played on the post game show. It meant the world to know a guy I respected immensely had respect for me in return.

That’s why I wanted to repay the favor. Despite humble beginnings, you made an impact P.J. You told the media on your way out that Phoenix changed your life. Well you changed us too. Thanks for your hard work on the court and your passion for the community off of it.

You’ll always be a member of the Phoenix family and we wish you the best in Toronto and beyond.