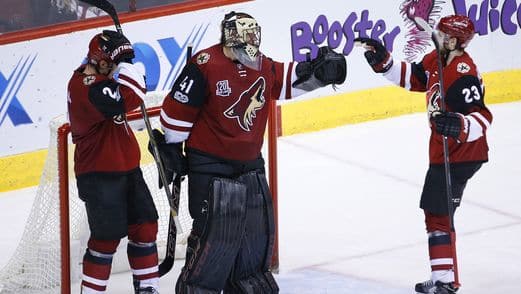 ‘Pack Mentality’ is a new column here on Sports360AZ.com to keep you up to date with what’s happening around the Arizona Coyotes. As the Coyotes get back into the swing of things after the All-Star break, here’s what you need to know:

Saturday night at the NHL All-Star Skills Competition, Mike Smith shot a puck across the ice into a six-inch opening in the opposite net during the “goalie goal” challenge. Smith helped the Pacific Division defeat the Central Division 10-3 in the first round, but the Pacific Division fell to the Metropolitan Division in the final game 4-3.

Smith’s performance during the All-Star weekend caused some heads to turn in his direction and speculation of waiving his no trade clause began to emerge. In 2013, Smith signed a six-year, $34 million contract that included a no-movement clause through his first three years with the Coyotes and the no-trade clause which would cover the last three. Despite the chatter, Smith said he has not considered trying to void the clause. He told azcentral.com that he feels the Coyotes have the potential to be great and he wants to be around when the big turnaround happens.

Jan. 26 the Coyotes beat Vancouver 3-0. The ‘Yotes notched their third straight win and had their fifth straight game with three plus goals.

💥 Burmistrov now has six points in six games as a Yote 💥 pic.twitter.com/kSHTh5s8hU

The 3-0 win was Mike Smith’s 31st career shutout and his 20th with the Coyotes. The shutout moves Smith within one game of tying the franchise shutout record.

Tuesday night the Coyotes took on the L.A. Kings. The ‘Yotes put up a fight, but fell to the Kings 3-2, snapping a three-game win streak. After the game, Coyotes head coach Dave Tippett said he liked the way his team competed, but there’s still some guys he’s looking to get more out of.

The Coyotes take on the Chicago Blackhawks Thursday, then head to San Jose on Saturday.

Down South – All-Stars/Roadrunners To Travel to Valley

Tucson Roadrunners Christian Fischer and Kyle Wood represented at the AHL All-Star game Monday. Fischer was the youngest player on the ice and the 10th teenager to have the honor since 1995. Wood became the first player in Roadrunners history to score a goal in an All-Star game.

.@KyleWood_3 beats the buzzer to score the first #AHLAllStar goal by a #Roadrunners player in franchise history! pic.twitter.com/VcckxABzfx

The Coyotes’ AHL affiliate went in to the All-Star break with a five-game losing streak, their longest of the season. They’ll look to bounce back with a trip to the Valley to play the Charlotte Checkers at Gila River arena Friday and Saturday.

Sports360AZ Retweeted · Brad Cesmat @bradcesmat
Monday, January 20th, 2020 at 12:37pm
Garoppolo coming out of high school " I didn't have a lot of offers. I think I had three D-1 AA offers and Eastern Illinois was one of them. It worked out pretty well."
Mahomes college offers were from just three schools Houston, Rice and Texas Tech.
View on Twitter
10