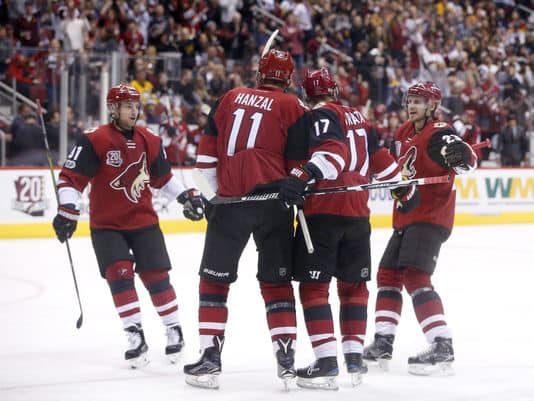 ‘Pack Mentality’ is a new column here on Sports360AZ.com to keep you up to date with what’s happening around the Arizona Coyotes. Here’s what you need to know as the ‘Yotes hit the road this week:

The Coyotes have been playing tough these last two weeks. The ‘Yotes put up a fight in a 4-3 loss to the Chicago Blackhawks on Feb. 2, then got the 3-2 win in San Jose on Feb. 3 in a shootout. Last Thursday, the Coyotes forced OT against the Montreal Canadiens, but fell 5-4.

Saturday’s OT win against the Pittsburgh Penguins was an improvement but wasn’t ideal, Tippett said.

“That’s why coaches get gray hair, right there,” Tippett said after the win.

The #Coyotes enter tonight with a 5-2-1 mark in last 8 games and includes wins vs. 4 playoff teams from last year, including SJS and PIT.

There has been trade talk surrounding center Martin Hanzal lately, whose contract is expiring soon. Saturday, Hanzal scored his 11th goal of the season against the Penguins, raising question marks on just what the Coyotes will do with the center as the March 1 trade deadline approaches.

Hanzal was out earlier in the week with the flu, but didn’t want to miss Saturday’s game against the defending Stanley Cup Champions and Sidney Crosby. His performance against the Penguins was key for the Coyotes, Tippett said.

“Coming off a couple days sick, and going against if not the best, one the best players in the world, head to head, that’s a big challenge,” Tippett said. “Marty came up big.”

“He’s a good young player, who will continue to grow,” Tippett said of Dvorak after Thursday’s game. “It’s good to see him continue to take steps forward.”

Down South – Struggles in Tucson

Coyotes’ AHL affiliate, the Tucson Roadrunners, have been struggling as of late, dropping eight of their last nine games. Coyotes prospect Christian Fischer leads the team with 18 goals in 37 games. Laurent Dauphin has seven goals in 17 games, while Anthony Duclair has one goal in nine games.