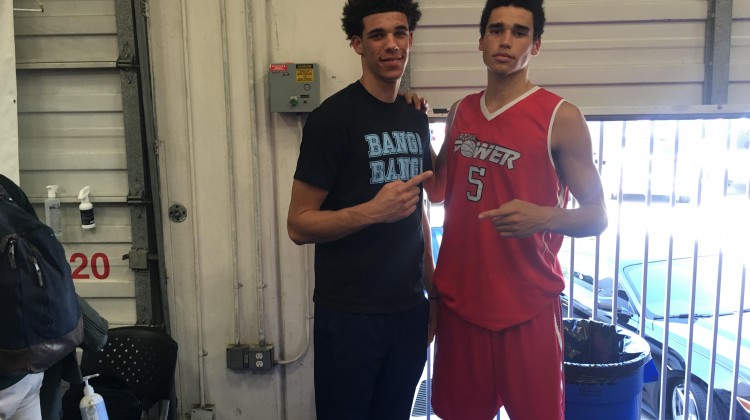 Five years ago, a tall, skinny seventh-grader made his way onto the court with the hope of surviving tryouts for the Payne Junior High School basketball team in Queen Creek.

He was a long shot but impressed coaches with his mid-range shots, and turned out to be the last person to make the cut.

From there, he endured a long season on the bench watching his teammates log more playing time.

Once he made his transition to high school, everything changed for Gabe McGlothan.

This towering young man stands at 6-feet- 5 and is the starting center for the No. 1 ranked Basha Bears.

He has enjoyed success during his four seasons and is amid the playoffs as his team chases a state title in his senior year. His success on the court has also led him to a path he never thought he would take.

One directed toward a military academy.

Basha coach Mike Grothaus, who has coached McGlothan all four years, remembers the first time he saw him on the court.

“I’ll never forget the day he walked in,” Grothaus said. “He was a skinny kid, and you could just tell there was something different about him.”

Grothaus saw the potential in McGlothan based on his size and his appearance, and he knew this kid had the capability to do great things on the court.

“I called him a blank check,” Grothaus said. “He had big feet, long arms. You could just tell he was going to fill out. I knew he had a chance to be real special.”

Fill out he did as he became a playmaker and grew another four inches over the course of high school to reach the height he stands today. That height helped him finish third in the Division 6A with 9.8 rebounds per game this year.

McGlothan finished second on the team in points per game (14.1) behind teammate and best friend Terrell Brown (15.3). The two have played together since middle school, and they have been forces on the court for Basha the past few years.

Brown sees McGlothan as a leader and as a difference-maker in games.

“He’s a great player. I always give him the ball,” Brown said. “I tell him to put in some work and get some points up there because he’s the best player on our team.”

McGlothan’s play has not only helped his team reach the postseason though. It has also helped him plan his future.

He had multiple offers from colleges to play ball, and he narrowed the list down to two schools that captured his interested.

The first was Eastern Washington. The second? The U.S. Military Academy (West Point).

He chose the latter.

“I really decided to go to West Point because of the kind of person it builds someone into,” McGlothan said. “Coach G. always instills responsibility, respect, everything like that, even leadership. I feel like that school was the best place to really build on those types of things. It really fit my morals.”

McGlothan was also drawn into the program because of its reputation and the honor that comes with serving one’s country.

The opportunity to attend such a prestigious academy was too good for him to pass up.

“It really spoke to me,” McGlothan said. “You get to do something that not too many people get the opportunity to do, go to that school, and also be put alongside some of the brave that decide to go out there and serve. I really look up to that.”

Grothaus believes McGlothan is a special individual, who is well-suited for one of finest military academies in the country.

“Gabe McGlothan is a kid who is a rare student-athlete, and there’s a reason why he is going there,” Grothaus said. “He is so well-rounded, academically, athletically. He’s a little bit of everything.”

It was not always McGlothan’s plan to be part of the military. He recalled sitting in an Arizona history class his junior year when a recruiter came in and spoke.

Some of the recruiter’s words resonated with him and becoming part of the military developed into a secondary interest. He did not view it as a realistic option though because of basketball.

He pictured himself going to college to play basketball while securing a higher education. The military option did not seem to fit in with his life path, but then West Point opened his eyes and made it possible.

The decision was not an easy one for him. He wanted to make sure he made the right college and sought advice from family and Grothaus.

That helped ease the decision-making process and made him think about what he truly wanted in life. He committed to West Point on October 29.

Interestingly, there are coincidences behind the career choices he made that he later found out.

During a conversation with his mother, he discovered two things that made his choice to attend West Point seem like destiny.

“My mom comes up to me a couple of months later and is like ‘I just found out something really interesting and I just thought about it. You committed on your grandpa’s birthday,’ ” McGlothan said.

His late grandfather served in the U.S. Army during World War II. He also studied mechanical engineering and worked as one for many years, which is the exact field McGlothan is planning to study at West Point.

McGlothan was surprised and intrigued.

“It was really interesting how I committed on his birthday, and I ended up going to the same military field and then also majoring in the same type of engineering,” McGlothan said.

With the Bears now focusing on the quarterfinals of the Conference 6A playoffs, it pains Grothaus to think of life on the court after McGlothan leaves, but he knows Gabe will do great things beyond basketball and flourish at West Point.

“He’ll be successful there on the floor and in the classroom and then what it obviously comes to mean to serve our country,” Grothaus said. “He’s that kind of young man.”