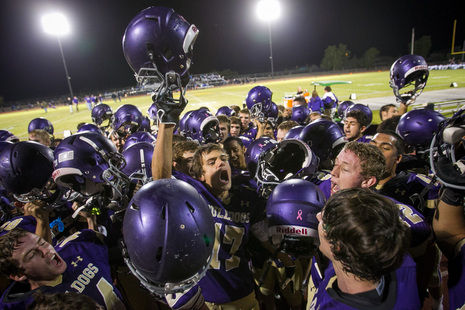 In a way, the Queen Creek Bulldogs are re-inventing themselves a bit.

No, head coach Travis Schureman and his staff aren’t changing the Dogs’ hard-nosed, lunch pail approach but they are, in some ways, changing their appearance.

In what has been in the works for the last several weeks, Queen Creek exclusively unveiled their new Nike home uniforms to Sports360AZ.com in the video below which they will wear beginning in the fall. These will not be their exclusive threads but will be worn for select games.

“I’ve changed them probably 10 times,” Schureman said to Sports360AZ.com. “I think I like that the Vegas gold and purple really stand out on the black jersey. Black is sharp and the kids will like them! We just thought we [needed] another option at home.”

Schureman was the main designer but said he received input on the new look from QC athletic director Paul Reynolds, his coaching staff and the school’s booster club president. The costs for the 85 sets ran between $15,000-$20,000 according to the head coach.