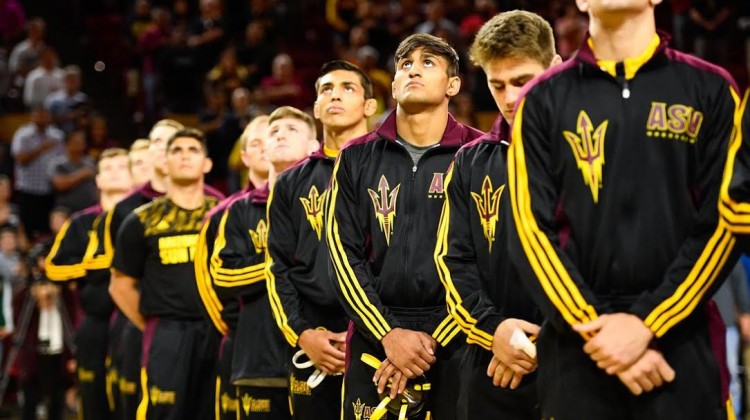 For Zahid and Anthony Valencia, wrestling was in their hearts before they could walk.

The brothers have a passion for the sport and started wrestling when they were toddlers. That desire has translated to success and an impressive rookie season for the Arizona State duo, who will take a combined 60-5 record into Sunday’s Pac-12 Championships.

“We don’t remember the first day,” Anthony said. “It’s kind of like learning how to walk and not remembering how it happened but we know we were a part of it.”

Anthony, who is 20 and nearly a year older than his brother, recalls his first wrestling memory. It was at a youth wrestling club, and he remembers drilling on the side of the mat with his brother and father and watching the older kids practice.

Their father, Ruben, would take the boys to the Terminators Wrestling Club in Norwalk, California. A close friend of the family owned the club and he would let them watch and take in the environment of the practices.

“We would sit in the corner of the mat and I’d just have them smell the mat and smell the way a wrestling room was like,” Ruben said.

They would go every day for a year and drill on their own in that corner for 20 to 45 minutes until they were old enough to practice and compete with the team.

The first year of competing for both was not promising with Zahid going 1-18 and Anthony 4-22.

After that first season their father found Mike Timmons, a Russian wrestling coach, to help them improve their skills and techniques. Valencia tried to get the best of the best to work with his boys because he knew there was something special in store for them. That next year of competition they went 46-9 and 49-7, respectively, and became the two best wrestlers on the team.

From there they continued to shine. Anthony won his first championship at Tulsa Nationals when he was 6 and Zahid did not lose a match between the ages of 9 and 10.

It did not stop there and each won high school state championships in California. They created a buzz in the world of college recruiting.

Arizona State caught their attention when it hired coach Zeke Jones, who was an Olympic silver medalist for the U.S. team, a world champion in 1991 and an accomplished U.S. Olympics team coach.

There was never a thought of going to different schools.

“It was pretty obvious that we wanted to go to the same school and when we heard about Jones we were both pretty excited about it,” Anthony said.

The two have trained together since before they can remember and has transferred into their college careers. They motivate each other.

“It creates competition which is really good for us,” Zahid said. “Ever since we were young, we would compete to see who was better by who would win more tournaments or who would get more pins.”

The motivation and competitive culture they have grown up with has paid off.

Going into the final stretch of their first season, after red-shirting, Zahid is 31-0 and ranked first in the nation by InterMat at 174. Anthony is 29-5 at 165 pounds.

When asked about their future goals, neither hesitated.

“The main goal as far as training here is to become World and Olympic champs,” Anthony said.

“I want to eventually make a US World Team and win the World Championships and then make an Olympic team,” Zahid said.

These lofty goals were preceded by the dedication and motivation developed throughout the years. The Valencias live and breathe wrestling.

The only thing left to do is finish the story with gold medals in their hands, knowing that the time and work put in has and will always pay off.