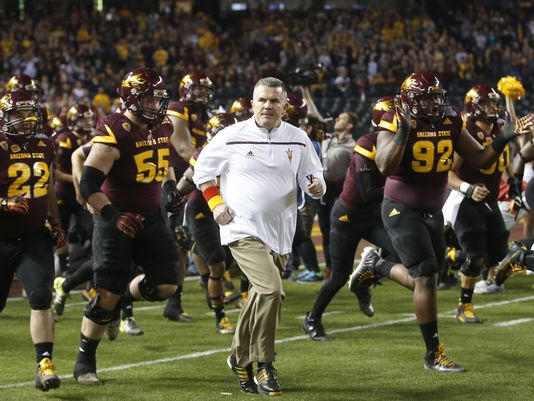 We are less than a week away from LOI Day and Arizona State is once again getting a nice haul of talent to #StayTrue to ASU.

SunDevilSource.com Publisher and long-time ASU insider Chris Karpman recently joined Sports360AZ.com’s Brad Cesmat to discuss a myriad of topics regarding the potential 2017 class to this point and the Sun Devil program in general coming off consecutive losing seasons under Todd Graham.

BC: How many do you think are considering flipping out of ASU, do you think they keep the whole class together?

CK: “Good question, I think there’s probably two guys considering flipping right now, maybe a little bit more than that, but just two that I’m aware of. You have to see what happens with ASU and an offensive coordinator and if that gets done by the end of the week. Ryan Kelley’s mother told me that she still sees him signing with ASU but also they’d like to speak with a coordinator and quarterback coach.”

BC: In Ryan Kelley’s case, I had a lot of fans send me his tweet that he slept three hours in the last 75 hours I guess.

CK: “He also deleted a tweet saying there was no doubt he’d be at ASU. He tweeted a response to someone and then deleted it so, there’s really a lot going on there.”

CK: “Not at all, he largely committed to ASU due to the relationship he had with Chip Lindsey. Seeing Chip Lindsey basically leave was a surprise the way that it happened and how late in the process it happened. Now that you have this uncertainly at that key position and really the offense in general; that would unsettle pretty much anyone I would say.”

BC: When you look at everybody [coaches] leaving ASU you can’t simply say “that’s just part of the business” anymore. There’s something inherent going on there, right?

CK: “I think you have to see the forest for the trees. Maybe there’s a little bit of that, yes, but not as much as it would probably appear on its surface by seeing 10 coaches in two years. The reason I say that is because really only two of those 10 coaches were demoted or left coaching. Bo Graham and Paul Randolph were the two that really come to mind. Everyone else either got more money or more responsibility or both, or there were some family considerations.”

BC: What do you like most about this class a week away?

CK: “Well, they have a very good chance to sign at least three of the top five in-state players, which they’ve probably never done before… So, if Kelley sticks that’s a big development for ASU. They’ve got a chance to get, and probably will get K.J. Jarrell [note: he did commit to ASU Wednesday] who comes from one of the top schools that you want to mine successfully. They will probably sign four Saguaro kids so in-state, that’s big especially coming off a year you sign in which you sign N’Keal Harry and Chase Lucas. They have about four local offensive linemen who are in their program. They’ve made a little bit of a dent there, that’s something you can definitely hang your hat on. I think that some of the other guys that they’ve taken are good solid players. Now they don’t have enough stars, they’ve put a lot of eggs in the basket of a handful of these guys coming up late in the process and I don’t know that they’re going to get them. That makes it kind of tough but when you look at class on a whole, what you see is maybe not as bad of a class as you would have anticipated given how much coaching turnover that there’s been and given their record on the field in the last two years.”

BC: A week away from letter of intent day what have they not addressed enough, in your opinion?

CK: “They need immediate safety help. They have no junior college DB’s committed to the class. They have one four-star prospect, Alex Perry, who is one of their better prospects. Is he going to be immediately ready? I’m not sure. They really need five defensive backs including at least three guys who can play corner or safety. They’re in on a couple late like Jaylon Johnson, a Top 100 player, who’s deciding between ASU and Utah. They need to have success there. They probably needed to take another junior college player or two. They need a left tackle; they don’t have a good track record in recruiting and getting those signature pieces… Those are the two biggest needs that they have.”