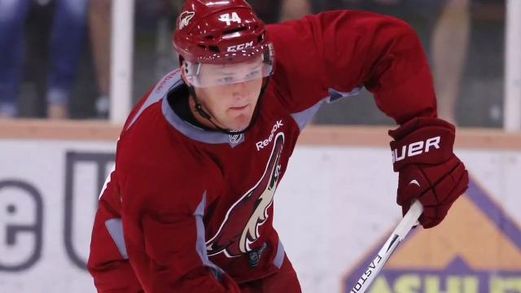 ‘Pack Mentality’ is a new column here on Sports360AZ.com to keep you up to date with what’s happening around the Arizona Coyotes. With two wins in their first two games back home after a week on the road, the ‘Yotes are heading into Thursday’s game against Vancouver on a good note. Here’s what’s been happening in the last week with the Pack:8u

New Kid on the Block

Friday the Coyotes brought up Christian Fischer from the Tucson Roadrunners. Saturday, Fischer made his NHL debut. The rookie scored his first NHL goal in his first game becoming only the 11th player in franchise history to do so. Then on Monday, in his second NHL game, Fischer scored his second career goal becoming the first player in the Coyotes and Winnipeg Jets franchise history to score in his first two NHL games.

“The first game (was) filled with emotions, it’s a lot of show, cameras following, stuff like that,” Fischer said. “But today (Monday) I think I played my game more, I was more confident with the puck.”

Monday, Jakob Chychurn posted his first multi-point game with a pair of assists in the ‘Yotes 3-2 win against the Florida Panthers. After the game, Chychurn, a Florida native, recalled his first organized skate with the Panthers’ mascot.

“I was probably two or three years old,” Chychurn said. “My dad got me out there with the mascot, Stanley C. Panther…it’s kind of the first memories I have on skates.”

Work to be Done

Thursday general manager John Chayka announced the Coyotes had sent down Anthony Duclair to the Roadrunners and Friday they announced Laurent Dauphin was making his way South.

Of Duclair, Chayka said, the hope is that the forward can “regain his scoring touch” in Tucson and rejoin the Coyotes soon. This is Duclair’s first appearance with the Roadrunners.

The Tucson Roadrunners’ five game win-streak was snapped Saturday with a 3-1 loss against the Charlotte Checkers. Sunday the Roadrunners recorded their second straight loss falling 2-1 in Charlotte. Duclair scored the only goal for the Roadrunners Sunday in his second game in the AHL.