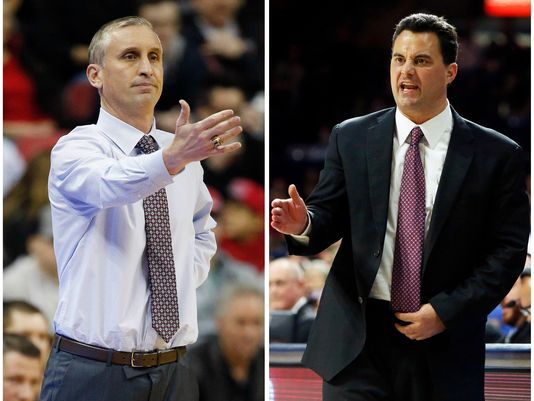 “If anyone wants a win here, they better go to f—ing Tucson.”

On Thursday, the Territorial Cup rivalry will hit the hardwood for its first installment of the season when the Arizona Wildcats host the Arizona State Sun Devils at the McKale Center in Tucson.

Following the Sun Devils’ (9-8, 2-2 Pac-12) last-second victory over the Colorado Buffaloes on Saturday, a passionate Bobby Hurley relayed a message to his players ahead of their matchup with the Utah Utes, caught on camera:

“This is about Saturday. We’re really on to something. Be professional. Be mature, be smart. Make sure you get your rest tonight, and we’ll take of our bodies tomorrow, because they need to be taken care of so that we’re at our best on Saturday.

Because if anyone wants a win here, they better go to f—ing Tucson.”

"If anyone wants a win here, they better go to f—ing Tucson." — Bobby Hurley, man. pic.twitter.com/0ol2ga2ehT

This wasn’t a malapropism on Hurley’s part. The comments came with the Sun Devils due to face the Wildcats (15-2, 4-0 Pac-12) in a little over a week. The second-year coach meant what he said, although what he exactly intended was left for interpretation.

Hurley’s quote worked its way over to Arizona head coach Sean Miller, who was presented an opportunity to ignite the gasoline spilled over by his rival. Instead, he chose to express total comprehension of the situation during a midweek press conference on Monday, saying:

“Bobby is a great competitor himself. The challenge as a coach is to get your team motivated and to have your team ready to play, and to build a program. Confidence is a part of that.

There’s a lot of different ways to go about instilling that. I don’t think he meant that in a derogatory fashion towards our program or things here in Tucson as much as he’s making sure that his guys believe in themselves and know the objective is to be a tough team to play against and to win, and I respect it.

I know him, I know where he’s from, how he’s wired. He’s a great competitor—it’s what made him a great competitor. In today’s world, the behind the scenes things can really be understood, and this is a classic example.”

Since joining the Wildcats for the 2009-10 campaign, Miller won 10 of 14 (71.4 percent) head-to-head matchups against the Sun Devils, including the two games Hurley coached against him last season. Arizona has been ranked 18th or better for nine of those, losing only twice in such meetings.

The Wildcats’ play can do the talking.

Meanwhile, Hurley and his Sun Devils have to — and when you think about it, should — use any and all motivation to rehabilitate the program’s image. There’s nothing to lose when the school is perceived (and statistically, is) the lesser of the two; If ASU wins, it backed up its talk and pulled off an upset, but if ASU loses, the outcome was expected.

The only risk Hurley takes by making these types of statements is providing bulletin-board material for his opposition. Entering the contest amidst a nine-game winning streak, Arizona won’t likely need it.

Meanwhile, by diffusing the pregame commentary, Miller eludes giving the Sun Devils something to galvanize over after coming off a loss to Utah in which ASU shot 29.6 percent from 3-point range. During their winning streak, the Wildcats have shot 47.6 percent from the field and made 42 percent of its 3-point attempts.

The Sun Devils will have to shoot much better if they want to have any shot with the Wildcats, but one way or another, Hurley’s words will ring true Thursday — someone in Tucson is going to be coming away with a win and the other, a loss.