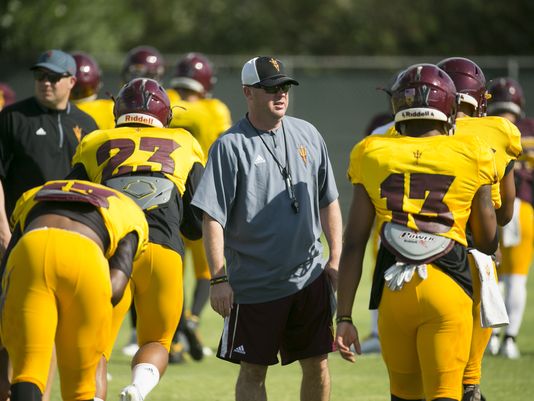 Less than two weeks before National Signing Day the Arizona State Sun Devils are looking for a new offensive coordinator after Chip Lindsey left for the same position at Auburn.

Fired up to be back on the plains with the AU Family! Ready to go to work! War Eagle! pic.twitter.com/96dLbxkZBv

The move of Lindsey means the Devils will have a new offensive coordinator for the third consecutive season. News broke Saturday morning Lindsey would be leaving the program, just hours after making final ASU recruiting pitches with LOI Day rapidly approaching. Lindsey has a connection to the Tigers, previously working under head coach Gus Malzahn as an offensive analyst.

In his one year on campus Lindsey was a key recruiting figure, helping lure several players to Tempe, including former Alabama quarterback and blue chip prospect Blake Barnett.

Key injuries and a seemingly revolving door at quarterback led to an inconsistent offense last fall as the Sun Devils finished ninth in the Pac-12 in total offense and sixth in scoring offense at just over 33 points per game. No team in the conference allowed more sacks in 2016 (41).