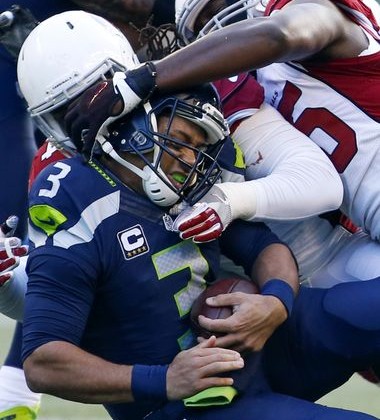 The “All or Nothing” season is now behind us. The Cardinals missed the playoffs and were one of the most disappointing teams in the NFL. Clearly it was a season of “Nothing”. Time to turn the page. The window isn’t closed on this roster to bounce back in 2017 and be a factor in the NFC. Here’s a few reasons why I believe that they aren’t in a free fall.

QB-Carson Palmer isn’t the future, but he is the QB for 2017.  I’ve said over and over that the team needs to find the longterm replacement(Deshaun Watson?) But Palmer had a more than adequate season for the Cardinals in 2016. Yes, there were moments when the ball didn’t come out nearly as crisp as I would’ve liked to have seen, but more often than not Palmer had his team in position to be in games late into the 4th quarter.

RB-David Johnson(knee injury aside on Sunday) Palmer has a bell cow to hand the ball off too. Not many quarterbacks can say that in the NFL. Johnson showed he can do it all  in 2016. Running, catching, and blocking. Again, we don’t know how severe the knee injury was that Johnson suffered on Sunday, but assuming it’s not a longterm injury, Johnson gives the Cardinals a terrific offensive tool.

Solid, Not Strong Defense-The combination of  Chandler Jones and Markus Golden at linebacker showed more than just flashes that they are a solid 1-2 punch. Calais Campbell and Tony Jefferson are both unrestricted free agents. Find me a middle linebacker, corner, and safety. Sure, they didn’t make the playoff, but I don’t think it’s a group that needs a total makeover.

NFC West-You tell me. Are the Rams and 49ers going to be able to turn around their rosters in one years time? Both will be led by new head coaches and philosophies. The Cardinals went 4-1-1 against NFC West teams in 2016, winning on the road at all three. They’ve won 6 straight games on the road within the division, the longest stretch in team history.

He ended up leading the NFL in receptions for 2016. That doesn’t mean that he should return in my opinion. No one lasts forever. If there’s any doubt in his mind about strapping it up for the grind of another season, then he should retire. I would have no problem with that. IF he comes back, it’s unrealistic to believe that he could put up the kind of numbers he did this past season. When a players skills slip, it can go in a hurry. I don’t want to see a future Hall of Famer just hanging on.

I could cut and paste the above thoughts on Fitz and insert them for Arians. Yes, there are times that you believe he is too stubborn for his own good(special teams in 2016). But there are more moments that show me that he’s the right man for the job. Now, when it comes to his health, none of us know. He can say all the right things about coming back, but I think a lifelong NFL coach should take some time away from the game, head to his inner circle, and then make the right decision. Arians did have two hospital stays in the last six months. I don’t need anyone to explain away how severe those episodes were. I just know that there were TWO of them.

There’s enough here to bounce back and compete in 2017. We all saw what a disaster the special teams ended up being.Blowing up a roster over one area just doesn’t make sense.