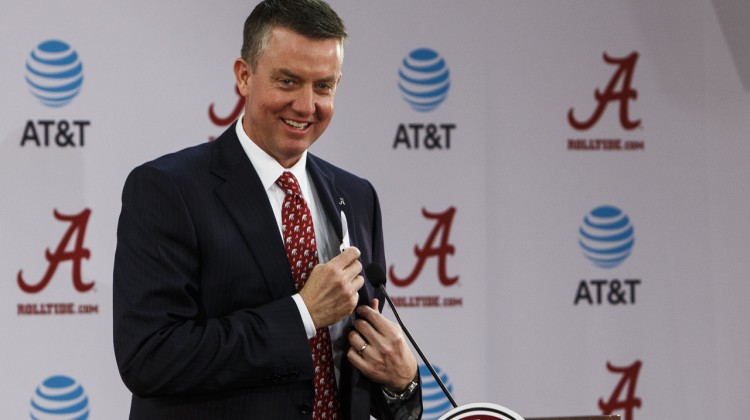 This week outgoing University of Arizona athletic director Greg Byrne is putting the final touches on his tenure in Tucson before taking over the same position at the University of Alabama.

Always forthright and honest in his goals and visions as a college administrator, Byrne recently took some time to join Sports360AZ.com’s Brad Cesmat for an in-depth look at how the recent past unfolded and how he ended up in Tuscaloosa.

BC: Who did you lean on most to make this difficult decision?

GB: “Well, my wife Regina first of all because we obviously used to live in Starkville which is only 75 miles away from Tuscaloosa. One of the great advantages I have is my dad was an AD (athletic director) for 29 years, in the Pac-10 and Big 12 and then the SEC to end his career with Texas A&M. I’ve always been able to get good sound advice from him without any agenda at all, with him being my dad and me being his son, so I’ve always been able to bounce that off of him so that’s always helpful. Then I got a couple other AD friends especially Scott Stricklin, who’s at Florida, who has always been really strong for me in every aspect.”

BC: What did you need to learn about that job that you didn’t know?

GB: “I knew about Alabama and the history. I told the story in my press conference when I first went to Tuscaloosa about 15 years ago and went around the campus. I respect, obviously, the great historical times under Coach Bryant and at the same time too there’s historical times going on right now in Tuscaloosa under Coach Saban.

When you go through a process like this you want to check things out, where they are competitively, academically, compliance – across the board facilities. I had a pretty good idea on a lot of those things just because Alabama’s obviously in the news a lot, it’s very easy to learn and read about. Then as it progressed, it seemed like they were pretty focused, potentially, on me. You just had to see where the process led and I hope that people respect it. You pray about it, you ask for guidance and direction, and the opportunity came along.

We have mixed emotions because we absolutely love the University of Arizona and all the people, the supporters, the student athletes, the coaches and the staff. I really felt like we were all trying to pull the rope in the same direction, collectively. That’s not easy to walk away from but at the same time too it’s an incredible opportunity at the University of Alabama.”

BC: In the arms race of facilities Clemson is opening, what I hear, some world-class things. Is Alabama where it needs to be or is that one of the items you need to address once you get there? Or is that ALWAYS something to address?

GB: “I think it’s the latter; it’s always something to address. Their infrastructure is actually really, really good but you can’t just sit there and assume “well we’ve got what we need.” You have to reinvest in your success and you have to say what are our next steps because the reality is the competition is not slowing down. Auburn and LSU and all the schools in the SEC have got their pedal to the metal and you have to make sure you’re doing everything you can to keep the University of Alabama where it wants to be. That’s obviously very competitive across the board in all of its sports, you know, competing for National Championships and obviously the foundation of that is with football.

The job that Coach Saban has done there really is historical and it’s amazing. That’s something that Alabama cannot take for granted and needs to do everything it can to continue to move the program forward so it can compete at that level.”

GB: “That’s a good question, there are a lot of strengths in the Pac-12, their great institutions, the CEO’s, the presidents and the chancellors have been very supportive of athletics. At the same time, one of the absolute focuses that’s going to be critical for the Pac-12 moving forward is that it needs to maximize the potential revenues to get to the campuses and be spent on the campuses and be focused on allowing those campuses to reinvest in their success and reinvest in their infrastructure.

The world is changing. 20 years ago when Mike Candrea here at Arizona, who has won 8 national championships for softball, went to recruit he would just go over to California and say “I want this kid and I want this kid” and most of them would come over here. Those kids now travel all over the country with their club teams and the youth teams they play on. So the idea of leaving Southern California to go to Tuscaloosa, Alabama is not out of the question.

So the reality is, you have to make sure you’re competitive from an infrastructure standpoint because to be able to compete at the highest level, which is what the Pac-12 schools want to do, at least I believe they do, then they need to not take a back seat when it comes to the infrastructure and support on their campuses.”