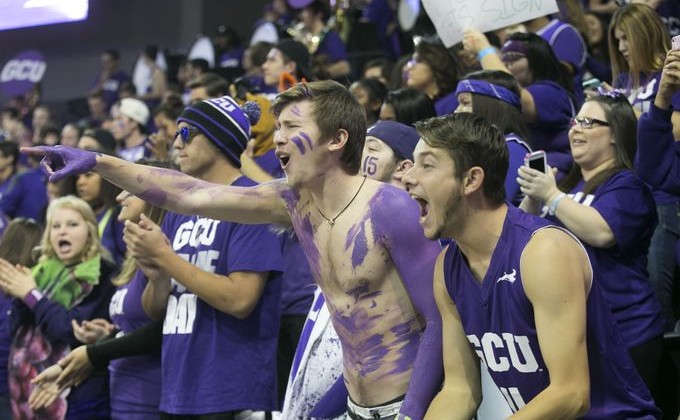 NO ONE should be surprised with what’s happening at Grand Canyon University on the basketball court. In 2009 I met school President Brian Mueller and his right hand man Stan Meyer, through then-head coach Russ Pennell. I went back to Channel 3 and told my news director that we should be doing stories on GCU athletics because they had a plan and a vision. I was laughed out of his office. Fortunately,  we had a Sunday night show at 9:30pm that management didn’t pay attention to, so I started doing my GCU stories there. Pennell would come in studio and I would do pieces on the growth of the campus. Full disclosure, my daughter attended and graduated GCU so I was on campus quite a bit seeing all the dirt being moved. Students would joke with me that GCU stood for Grand Construction University.

Once I started Sports360az.com I went to Mueller and Meyer and showed them the digital platform and they were very supportive. I hosted a weekly “Talk to the ‘Lopes” show with Pennell, where he was able to talk about the upcoming games and his program. NO ONE was doing that around GCU. We started covering their home games and doing feature stories on them in 2010 because NO ONE was doing anything on them. President Mueller asked me to host an athletic awards event at his home in 2010 and I saw how much attention to detail he was putting into all the student/athletes. It was pretty impressive.

President Mueller walked me around campus a couple of times in 2010 and spoke about the plans for building up the arena. Jerry Colangelo threw his support to GCU and it was very obvious that this was going to be the “Gonzaga, Marquette, Butler” model. When Pennell was fired in March of 2013, I had reported that Majerle would be named the next head coach of GCU. I was sitting on the tarmac on a Southwest flight in Las Vegas having just finished up the Pac-12 basketball tournament when Colangelo called  “Let me explain to you what we are doing”, I vividly remember telling Jerry “I get it, no explanation needed”, Russ had done a good job in getting the program started, but he wasn’t moving fast enough for GCU and Dan got SCREWED by the Suns. It all made sense to me.

Meantime, Arizona State basketball was trying to find their way with Herb Sendak as head coach and it just wasn’t happening. Outside of the James Harden era , the Sun Devil program was just something to do in between football season and spring football. Crowds were sparse, schedules weren’t very attractive, and the team won just a bit more than it lost. ASU played a much, much tougher conference schedule than GCU could ever imagine being in the Pac-12, but the non-conference games were basically on the same level as GCU. Colangelo, as head of USA Basketball, started asking coaches at programs like Duke, Indiana, Kentucky, Louisville, New Mexico, San Diego State, etc, etc, etc. to play GCU. In very short order  Grand Canyon  was playing a better non-conferance schedule than ASU. Meantime, Crow didn’t like the for-profit model of Grand Canyon and wasn’t too keen on the aggressive marketing of Mueller and GCU. He didn’t want his athletic department playing ANY games against ANY teams from GCU. Never mind that many of his own coaches told me flat-out they’d rather play GCU than roll up their travel budgets by getting on planes and going cross-country. To this day Crow is still dug in on this topic. When Ray Anderson was brought in as athletic director at Arizona State I asked him at a luncheon at Karsten Golf Course about the whole GCU situation and he said that it was something that was “above him”.

So here we are finishing up 2016 and Grand Canyon will be playing Arizona next week in Tucson. The Wildcats want a game with GCU but Arizona State still doesn’t. GCU has a white-hot student section that

Louisville head coach Rick Pitino raved about just last week. In my 23 years of being in Arizona, Grand Canyon has the best college basketball environment in our State. Arizona State has the “Curtain of Distraction” which is a cool idea, but it only happens when the opposing team shoots free throws. Arizona has a good  student section “Zona Zoo” , but the core audience of Wildcat games are older and much more reserved than what you see at GCU.  It’s a party at Grand Canyon. It’s what sports should be, an escape from the daily pressures of life for a couple of hours.

The momentum of the ‘Lopes program isn’t surprising to me at all. IF they can find a way out of the Western Athletic Conference, then the only item I can see that they will need is a bigger arena. They are GOING to win games and go to March Madness starting in 2018. The West Coast Conference would be the best landing spot, but for now the WCC school Presidents are resistant to add GCU. Louisville will pay GCU 100K to come to their building next year. Nothing wrong with that in my book. It’s been an impressive buildup, but there’s still plenty of work to do at GCU. Expectations will only grow with where the program sits today.