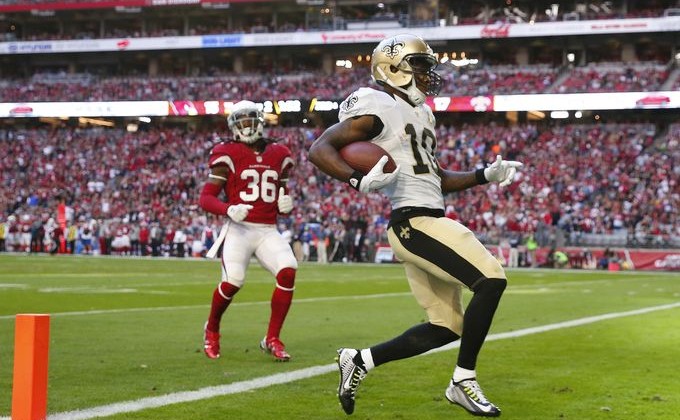 Brees would have plenty of time to throw the football and carve up the Cardinals defense most of the day. It was the 9th game this season in which Brees threw for more than 300 yards this season. Brandin Cooks would be wide, wide  open for a touchdown. He’d finish with 2 scores and 186 yards. The Saints running back tandem of Mark Ingram and Tim Hightower would combine for 115 rushing yards and two scores. It felt like every drive that the Saints had the ball, they were going to get into the end zone. New Orleans would role up  519 yards of total offense on the day.

J.J. Nelson drops a wide open ball that should’ve been caught for a touchdown late in the 4th quarter. Justin Bethel(“failure in progress”) offside on a FG, gave the Saints another crack at the end zone. They would score. Larry Fitzgerald fumbled a ball early that the Saints would recover. Yes there was an AWFUL officials call on a roughing the the passer penalty against the Cardinals, but the number of mistakes by Arizona pretty much summed up the season.

3)Calais Rumbles To The House

Nothing quite like seeing a defensive lineman rumble with a football to the end zone. In what could possibly be his final home game as a member of the Cardinals, Calais Campbell had a 53 yard scoop and score. Campbell is the longest tenured defensive member of the team and the last on-the field defensive link to the Super Bowl team of 2008.

The demise of the 2016 season will start with the awful special teams play by the Cardinals. Sunday, kicker Chandler Catanzaro wasn’t good, missing a field goal and an extra point in the first half. Catanzaro would be showered with boos throughout the University of Phoenix Stadium crowd. Justin Bethel offsides penalty in the 4th quarter on a field goal would be a killer.

5)Christmas Eve in the Pacific Northwest

With nothing more than pride and a paycheck to play for, the Cardinals will travel to Seattle to play the Seahawks on Saturday afternoon at 2:25pm. The two teams played to a 6-6 tie back in late October. Ar