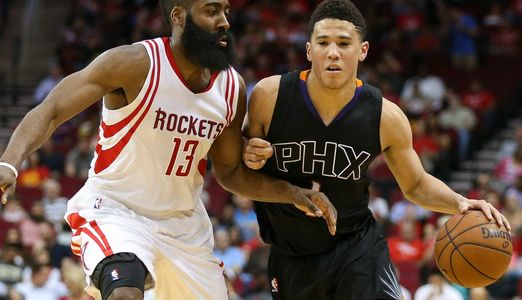 Later this week the single greatest holiday known to man is will take place. Nope, not Christmas and not even Hanukkah. If you’ve ever read me before it should come as no surprise that I’m talking about the holiday that was made famous in the 1990s on the historically great show Seinfeld, Festivus.

The best part of the holiday for the rest of us has to be the tradition of the airing of grievances and as a Phoenix Suns aficionado right now there’s plenty to air out. So before we put up the aluminum pole, I find tinsel distracting, and begin the feats of strength, it’s time to get a few things off my chest.

First off, despite what Twitter would love for you to believe, there is nothing wrong with Devin Booker. Sure, his field goal and three point percentages are down from his rookie season and things haven’t seemed to come as easy for him as in year one but that probably has as much to do with him being the primary focus of most defenses. Oh, and the fact that he’s just 20.

Most of us would be lucky to “struggle” at work the way Booker is. He’s already had five 30+ point games, one shy of how many he had last season, and is averaging five more points a game than his rookie campaign.

So what’s really the problem with Booker this season? The fans’ perspective and expectation.

While his rookie season was fun, it also created massive expectations. Granted, any glimmer of hope from a player and us as Suns fans would have glommed onto it like cream on each side of an Oreo. We’re so starved for our first super star since Steve Nash that many of us decided it was time to expect a 20 year old to do the next to impossible, be a transcendent star. Heck, go look at Booker’s per 36 minute stats compared to Kobe Bryant’s at the same age and you might see something familiar.

Which brings us to my second grievance. Perception is the 2016-17 Phoenix Suns biggest enemy. The perception that this year’s team was going to compete for a playoff spot and that strategically picked veterans would help young players grow rather than impede their playing time did more harm than good.

The reality is that this team isn’t much better than the one who earned the No. 4 pick in the draft whether you’re playing the veterans major minutes or the youth. So why not give the under 30 club, and the rookies in particular, a majority of the minutes to grow if you’re going to lose anyways? Just look at the Minnesota Timberwolves as the prime example. They don’t play anyone over 28 major minutes and they’ll be in a better place for it in the future.

Does losing and giving PJ Tucker, Tyson Chandler, Jared Dudley and Leandro Barbosa major minutes while giving Dragan Bender, Alan Williams and Tyler Ulis a DNP-CD (did not play – coach’s decision) in the box score accomplish anything other than frustrating fans? The answer is no. Unless you really believe you can inflate a player’s trade value years and years into their careers. But GM Ryan McDonough’s believes differently.

“Let’s do it the right way,” McDonough told Bright Side of the Sun of a potential playoff run. “Let’s not bury Dragan Bender and Marquese Chriss and play the veterans 40 minutes a night to get it.”

Hopefully we see the GM’s strategy play out on the court soon.

Oh, and that’s not all. There is one more grievance that needs airing.

Can we please stop saying the Suns don’t have an all-star caliber player? They do, his name is Eric Bledsoe and as long he’s on the court he’s one of the best guards in the game. Just look at his last three weeks. In 15 games he’s had 27 or more points in eight times. He’s become a leader on and off the court as well and even came into training camp in better shape, who knew that was possible, than he had been in previous years. If there weren’t more great guards in the Western Conference than there are Marvel movies he’d be a shoo in for the All-Star game.

So happy Festivus to the rest of us. And may the next 365 days bring fewer grievances and more wins for the the Purple Gang from Phoenix.