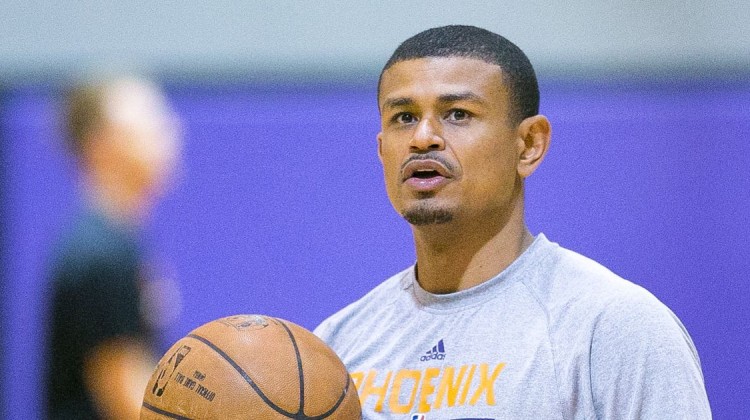 When I encountered Earl Watson for the first time last year in the lobby of the Luxor hotel in Las Vegas two things struck me about him. The first thing was just how polite the newest assistant coach of the Phoenix Suns was. At the time I introduced myself, before the start of Summer League, Watson had no clue who I was and thus had no real reason to be nice to me at all. That didn’t stop him from taking the time to have a very nice conversation with me. The other thing that stood out to me was the fact that he was a family man, something that is a real rarity in Sin City.

That sincerity never wavered over the coming months. As a player development coach he earned the trust of the Suns guards gaining rave reviews when you talked with Eric Bledsoe, Brandon Knight or Devin Booker. As a speaker he was capable of motivating not only players but anyone around him with a few words. I even found myself feeling as if I could run through walls after listening to him. Which is impressive because, as a fat guy, I don’t run let alone run through inanimate objects.

He was obviously a coaching star on the rise in the NBA. He wasn’t power hungry though. While I’d seen an assistant coach from the back row pull a coup and get his first head coaching gig by running his previous boss off, Watson’s rise to the top job with the Suns was different.

Before accepting the job as Interim Head Coach he spoke with outgoing coach Jeff Hornacek telling him he’d wouldn’t take the gig if he’d prefer him not to. It was a true sign of the type of man Watson was.

What I wasn’t quite sure of was if his positivity and optimism was an act that may dissipate as the pressures of the job began to mount. Many coaches come into the job with a Ned Flanders type disposition and leave somewhere closer to a Walter White mentality. Those were the guys whose optimism in bad times fell on deaf ears in the locker room.

This year Watson has remained extremely optimistic and positive despite his team being well under .500 and far below his expectations. He still talks playoffs when most people have already begun thinking about draft positioning and player development. Some may assume its delusional, I thought it was simply coach speak. That is until I read Zach Lowe’s interview with the Suns head coach.

In said interview you realize Watson’s positivity and optimism are part of who he is. They are something that is the byproduct of hardship and tragedy that have defined his journey: the murder of his brother and the sentencing of his killer just months before the Suns season began. At that sentencing, Watson publicly offered the man forgiveness.

“It’s why I’m not intimidated by our situation in Phoenix,” the first time head coach told Lowe. “It’s why when you ask if we can make the playoffs, I say there’s still a chance. If you listen to what the world says about you, you become someone you never wanted to be.”

Say what you will about his rotation and coaching decisions. But whatever you do, don’t question Watson’s sincerity and belief. From the hotel lobby to the locker room to the basketball court or a courtroom, he’s the same man. A kind one who truly believes in love, family and the power of working together despite the odds.

I’ve had the privilege of witnessing the last three NBA All-Star Saturday Nights in person. I saw the failed “freestyle” dunk contest and the amazing battle between Zack Levine and Aaron Gordon that single handedly breathed life back into the event.

While that was fun, the Suns have a dunk off waiting to happen that would put them to shame and it’d be between two guys that haven’t even hit 20 years of age yet.

If you’ve been paying attention to Vine this NBA season, or Sportscenter for you non-millennials, you know the two I’m talking about. Who wouldn’t want to see Marquese Chriss go toe to toe with Derrick Jones Jr. after practice, or hell, any other time, in a dunk contest with moves like these?

Jeff Hornacek returns to the Purple Palace for the first time Tuesday since he was fired as Suns head coach earlier this year. I really hope that Suns fans give Hornacek the applause he deserve when he’s announced as the head man for the Knicks.

He was a victim of unrealistic expectations thanks to overachieving with a roster that was meant to fail in his first year and it led to his demise. Hopefully the Phoenix faithful recognize that and give a warm welcome to a man who dedicate many years of his life to the purple and orange both on the court and the bench.

As a brand new father I spend many a night up late watching movies of varying quality on cable and Netflix while my daughter is restless. I’m not sure if it’s the lack of sleep or creativity, but it got me wondering which cable movie this year’s Suns would be.

I settled on Lethal Weapon 4. Like the Suns, it’s a movie with a mix of old cast members, primarily Danny Glover, Joe Pesci and Mel Gibson, and new blood, Chris Rock. While it’s entertaining at times, it’s basically the same plot lines we had seen many times before so we pretty much already know what’s coming.

The Suns roster this year is an interesting mix of old and new but the storyline seems to be the same. They’re good enough to stay in games but not quite good enough to pull it off in the end. Unlike the fourth installment in the Lethal Weapon series, this isn’t the end for the Suns though, it seems to just be the beginning. The Suns young core of Bledsoe, Booker, Warren, Chriss and Bender seems much more promising to recapture the previous glory than Rock ever did.