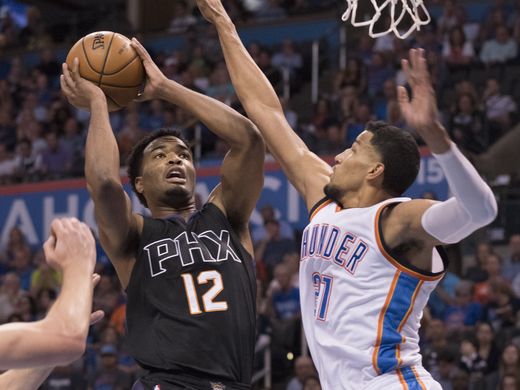 The Suns are five games in and without question the story of the start of the year has been the offensive explosion of 23 year-old T.J. Warren.

The former first round pick out of NC State got off to a great start in 2015-16 but a foot injury ended his season really before it got going. He only played in 47 games in what was expected to be his first full season with the team after going back and forth to the D-League in his rookie this season.

Warren came out for the start of the 2016-17 season stronger, more trim and more athletic looking with the hopes of taking his game to the next level but from a national and even local perspective, he seemingly felt like the forgotten piece to this young puzzle.

Through five games, he has been the most prolific and consistent scorer for the Suns. Yes, more so than Devin Booker, Eric Bledsoe and Brandon Knight who were expected to be the main scorers coming in.

When you break down what Warren has been doing by the numbers, he not only is leading his team, but his name is up with the elite scorers and players in the NBA. Warren is top ten in the NBA in three shooting categories through the Suns first five games. He is fifth in two point field goals made at 42 which is only behind Toronto’s DeMar DeRozan, New Orleans’ Anthony Davis, Oklahoma City’s Russell Westbrook and  Portland’s Damie Lillard. All of which have been the talk of the NBA already this season with how they are scoring the ball.

Furthermore, Warren is sixth in total field goals made at 45 which is tied with San Antonio’s Kawhi Leanord and only behind DeRozan, Lillard, Westbrook, Davis and Houston’s James Harden. All elite scorers and all-stars who command the ball in their hands. Lastly, he is 10th in total points at 112.

Staying on the topic of being among the best in the league, he is 15th in the NBA in win shares at 0.7 which is an estimate of the number of wins contributed by a player. Seeing as the Suns are 1-4, the fact that they still have a player who has cracked the top 15 in the league with this stat but with only one win shows how much he has meant to this team on the floor.

Those are the numbers. Watching how he has been utilized I think has been very surprising as well. Head coach Earl Watson is creating an offense at times around Warren. There were times down the stretch of the win over Portland that off ball screens were set up for him to set up at the high post or low block.

Watson knew Warren was the one they needed to feed in the crucial moments of the game despite having shooters like Bledsoe, Booker and Knight on the floor. In four of the first five games, Warren has attempted the most shots from the floor or tied for the most of any Suns player. The only game he didn’t shoot the most, he shot the second most behind Devin Booker in their loss at Oklahoma City. However in that game, he shot a fantastic 13-18 from the floor and scored a career high 30 points.

Another aspect that is sending Warren to what looks to be new heights is his ability to get to the foul line. He is second on the team behind Eric Bledsoe in free throws attempted and has made 86.4 percent of them. That percentage is just second behind Brandon Knight of players who have shot at least ten free throws. Knight has made an incredible 18 of his first 19 which is among the best in the NBA.

T.J. Warren was drafted by the Suns with the hopes he would bring a dynamic scoring ability at his size and with the position he plays as that’s what he was able to to at NC State being an All-ACC performer. Thus far in 2016-17, Warren is breaking out looking like the the player Ryan McDonough hoped he would be back when they selected him 14th overall in the 2014 draft.