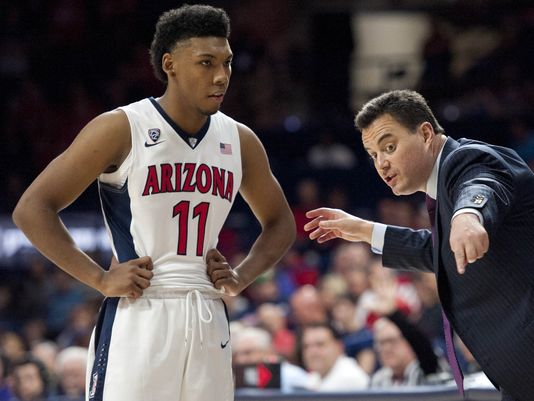 Though the game will not count in the win-loss column, the Arizona Wildcats basketball team began their 2016-17 schedule with an exhibition game against the College of Idaho Tuesday night.

While it was the return of the Cats to the court at McKale, two noticeable members of the roster were missing as sophomores Allonzo Trier and Chance Comanche did not dress.

Rumors have been circulating around Trier and a possible season long suspension. He warmed up before the game but did not dress come game time and sat on the bench.

Miller has continued to not comment on the situation around Trier which was put more into focus after not attending  PAC-12 media day. He was slated to go and then senior Kadeem Allen took his place

Center Chance Comanche also did not dress in the game. Miller did release a statement on him.

“Chance Comanche will not play in tonight’s game due to his own lack of academic responsibility. As a member of our basketball program, you are a student and an athlete, and you are expected to do the best of your ability in both areas. It is not an option to compete and be held accountable on the court but not in the classroom. This suspension is indefinite,” Miller said.

During the game, more frustrating news ensued as a third member of the 2016 recruiting class, redshirt freshman Ray Smith who missed all last season with the second torn ACL of his young basketball career, left the game twice due to injury. The first appeared to be a tweak to his knee or ankle coming down with a rebound but would return. The second was an awkward landing after a lay-up on a fast break and Smith immediately waved to the bench signaling something was wrong. The seriousness is not known but the look of it wasn’t good especially for someone with the history he has.

“It’s hard to take,” Miller said after the game. “It’s hard for his family, it’s hard for him number one. It’s hard for his teammates. When you’re around him every day, you realize that this wasn’t something where he just waited his turn and showed up tonight. You’re talking about hours, all through the summer, hours. Two, three, four hours of lifting weights, of rehabbing, of working so that this time could come. And he got to play ten minutes.”

“It’s heartbreaking it really is,” he stated. “I don’t have any words to really couch it, make it better than it really is. It’s just awful.”

@raysmith2297 I'm thankful for what god has given me. End of discussion. Thank you but save the sorrows.

Arizona went on to win the game 86-35. While there is a lot of excitement around the start of the season, it looks like the team as a whole has some things to iron out during non-conference play.