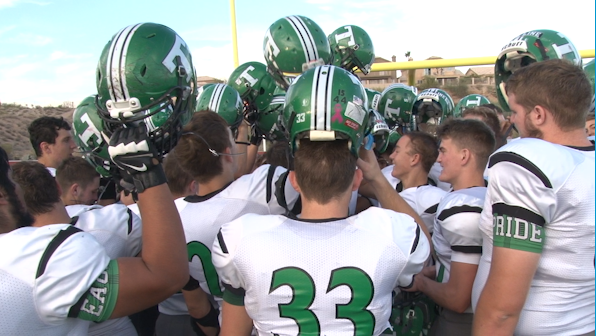 It was like an ending out of a movie for Thatcher High in 2A semi-final play Saturday afternoon.

The game was tied at 20 with under a minute to go and Santa Cruz Valley was inches from edging ahead to advance to the state finals.

Hold the Dust Devils at the one-yard line and the Eagles have a chance in overtime. Let them in to the end zone and hopes for a trip to state would be dashed.

Thatcher’s defense wasn’t ready to give up their season. The Eagles made an impressive goal line stand and the clock ran out sending the semi-final game into overtime.

“We may bend, but we won’t break,” Thatcher senior outside linebacker and guard Brandon Hayes said. “We just got it done.”

Throughout the afternoon, both teams favored to try for two instead of the extra point.

The first quarter started out with a 50-yard interception return by Thatcher quarterback and free safety Jake Dunlap. The Eagles then took a chance for two, putting them up 8-0.

The next play, Santa Cruz senior running back Devin Neal sped down the field for a 90-yard touchdown return. The Dust Devils decided to give two a try for themselves and quickly tied the game.

Neal was a force to be reckoned with for the Thatcher defense all afternoon. The senior scored two more touchdowns in regulation helping Santa Cruz carry the lead going into the fourth quarter.

After both touchdowns, the Dust Devils tried for two, but failed.

With six minutes left to play, Eagle’s senior tight end Nate Lee powered down into the end zone for a 70-yard touchdown to tie the game at 20. The Eagles also attempted to go for two, but came up short.

In overtime, Santa Cruz had possession first. Neal easily ran in for his fourth touchdown of the day, but a final attempt for two by the Dust Devils failed and the ball was placed on the 10 for the Eagles to make their drive.

Hayes easily pushed across and Thatcher set up for the extra point. All they needed was one.

“We missed the first PAT, so we were kind of reluctant to go for that one,” Thatcher head coach Sean Hinton said. “We looked at him and felt confident, so we gave him another shot at it.”

It was worth the shot, the kick was good. Thatcher edged the undefeated Santa Cruz 27-26 for a trip to state.

“This team, they’ve come back even when we should have been down and out,” Hinton said. “They just keep on fighting, it’s all the kids and how hard they work.”

Hayes had no doubts about his team’s ability to persevere, he said.

“I’m super proud,” Hayes said. “I knew we could do it the whole time.”