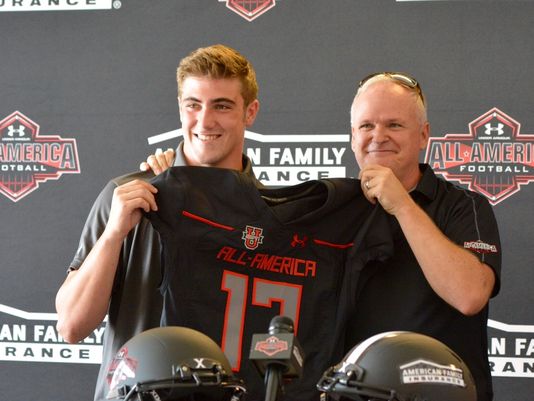 Outside of football, Adam Bay doesn’t make many snap decisions.

However, when it came down to picking the best school for his football career, Bay knew what he had to do.

The Desert Ridge High School senior long snapper, who had originally verbally committed to Missouri in August, flipped his commitment to Wisconsin after going on an official visit last weekend.

I am now Committed to The University of Wisconsin! #OnWisconsin #JumpAround 🔴⚪️ pic.twitter.com/5zHwMe0fNk

Bay told Sports360AZ.com he decided to change his commitment because he felt the program at Wisconsin was a better fit for him and the atmosphere is second-to-none.

“The academics are top-notch, the football team is #8 in the nation, their facilities are insane and their coaching staff and the players treat me like family,” Bay said. “There was no doubt it was the best fit for me.”

When asked what kind of player Bay is, Jaguars head coach Jeremy Hathcock said he’s a “very hard worker that has incredible ability and speed for his position.”

“It’s a great fit,” Hathcock said. “He is playing in a premier program that could play for a national championship while he is there…he will be a hit at college and possibly higher.”

Bay will use that speed this Friday as Desert Ridge heads for the 6A state playoffs Friday at home against Avondale Westview.

“Like any player, the dream is the NFL but I have to get through high school, then four years (at Wisconsin),” Bay said. “So I will take it by year but that’s the goal.”