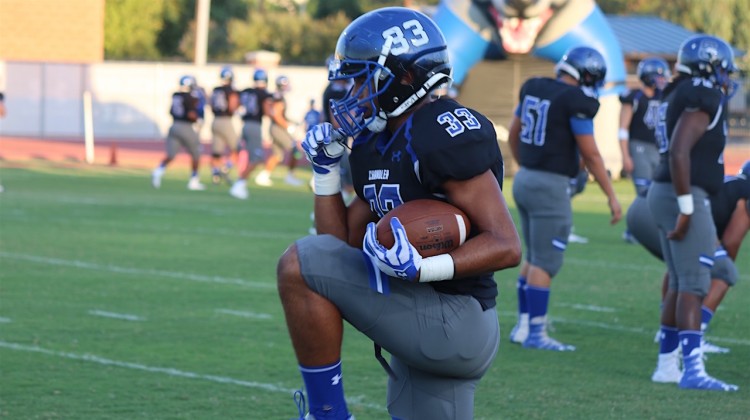 The Chandler Wolves are currently on an absolute mission and anyone that is getting in their way is getting the harsh brunt of it. I have been present for two of the last four Chandler games calling games along with the Chandler High Video Production team.

Those two games were blowout wins over Brophy the second to last week of the season and then Desert Vista on Thursday night for round two of the playoffs which are two teams that aren’t short on talent. When you combine the scores of the first half of both of those games, the Wolves outscored them a combined 97-7.

So in seeing that point discrepancy, it has meant I have had the opportunity to watch plenty of game action for players who are coming up the ranks for the Wolves. They already start underclassman like sophomore quarterback Jacob Conover, junior wide receiver Gunner Romney and junior defensive tackle Chris Manoa but there are more guys to keep an eye out for next season as their leaders and premiere players for 2017.

The first is sophomore linebacker Zach Bowers who in the three Chandler games, I’ve called this season, I’ve said his name over and over. For a sophomore to start on this roster, it speaks for itself. Bowers is everywhere on the field and hits with purpose.

Next is Decarlos Brooks who has been the Wolves’ third option to run the ball this season behind seniors T.J. Green and Ryan Johnson. Just a sophomore, he is a very strong runner and he never goes down on the first hit. He is so skilled as a football player, they have been using him at defensive back on defense this well just to have his athleticism on the field. He is strong and build like a rock. Decarlos is the son of Carlos Brooks who played a season with the Arizona Cardinals back in 1995.

Brooks will be sharing the backfield with Damien Maxwell next season as well who will be a senior. Another very strong but also fast runner. Maxwell and Brooks combined in backup roles this season have bother averaged over six yards per carry and combined have just under 400 yards rushing and four touchdowns on 56 carries.

I mentioned Romney but the tradition of incredible athleticism at wide receiver will continue opposite him after Johnny Johnson graduates. Jarik Caldwell is someone who has looked really good in the games I witnessed against Brophy and Desert Vista. He is a big receiver that also can be split out and beat defensive backs on the nine route for touchdowns. One Chandler coach compared the path he is taking to Justin Jan who is now at Colorado. Jan did not see a ton of action because of the depth ahead of him as a junior but once he became a senior, he broke out and ultimate received scholarship offers that landed him in the Pac-12.

That just begins to tell the story of what’s coming up the ranks for Chandler but living in the present, this Chandler team is absolutely on fire and will take on Perry who is coming off an exciting and emotional 63-60 overtime win over Hamilton on Thursday night.

“Kyler’s definitely bulked up. When he has a little more meat on his bones he can take more hits. He’s definitely a leader. When he talks, people listen.” Chandler Jones
View on Twitter
0
0

“I feel like if Zoom calls weren’t a thing, guys would be guessing. Those Zoom calls definitely meant something for sure.” Chandler Jones on how #AZCardinals coaches prepped team during the pandemic.
View on Twitter
0
0

“Our front office has done a tremendous job of complementing Kyler, complimenting Budda and Patrick.” Chandler Jones
View on Twitter
0
0

“We have more help on our team. We have a better team.” Chandler Jones on #AZCardinals remodeled roster.
View on Twitter
0
0