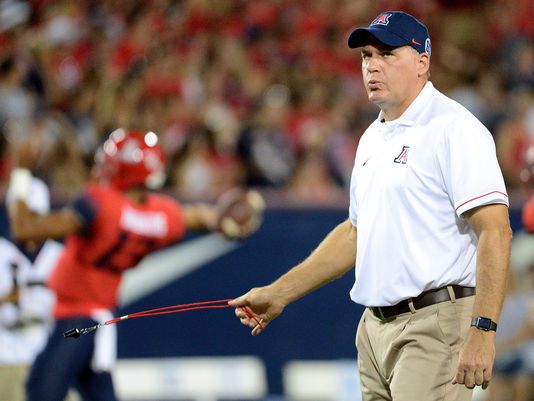 I just want to point something out to the voices, small group that they are, calling for head coach Rich Rodriguez to be sent on his way after yet another drubbing this past weekend.

What in the name of Pop McKale are you thinking?

I get it – you’re not the least bit happy about the 69-7 butt-whipping you took at the hands of The Pirate (that’s Washington State Head Coach Mike Leach for all you who haven’t been paying attention).

Losing by 62 is never fun, but it’s especially galling when it comes at the hands of a team based in the Pac-12’s most remote outpost, a program that opened the last two seasons with inexplicable losses at home to those juggernauts Portland State and Eastern Washington. (Yeah, I know, ASU didn’t beat them either, but at least the Devils kept the score within 50).

So, at 2-7, some of the so-called faithful think they know enough about the college football landscape to suggest they can do better than Rich Rod.

Really? Should we get out a DVD player and look at how that’s worked out for you the last 15 years?

At the end of the 2000 season, Wildcat boosters reached their boiling point with Dick Tomey, a man of immense integrity and football smarts, showing Tomey the door after all he could do was run a clean program and win more than he lost.

Tomey was replaced by John Mackovic, an accomplished head coach in college AND the NFL.

By year three, Mackovic had sparked a full-blown mutiny among his players, who complained to the administration about his treatment of them, perceived to be borderline abusive. Mackovic was dismissed five games into his third season with a 10-18 record.

As the 2003 season ended, the hottest coaching candidate in America was Oklahoma defensive coordinator Mike Stoops. Arizona Athletic Director Jim Livengood got him, and his hiring set off a hysteria seldom seen for an athletic program at Arizona that didn’t involve hardwood and rims.

It took Stoops five years to clean up the mess left by Mackovic and get Arizona to a bowl game. Along the way, Stoops revealed a portion of his personality that was not very appealing to the fan base. It was incredibly easy to enrage Stoops on the sideline. In fact, his 15-yard penalty for unsportsmanlike conduct led to a game-winning touchdown drive for New Mexico in 2007.

Three consecutive bowl appearances neutralized some of the concerns about his behavior, but a 1-5 start in 2011 was too much for Stoops’ new boss, Greg Byrne, to overlook. Stoops was dismissed with half a season left.

Byrne literally caught lightning in a bottle. After a year in television, Rodriguez, who had hit a coaching speed bump at Michigan, needed a place to reestablish himself as one of the top coaches in the college ranks. Arizona needed credibility. It was a perfect match.

His first four years featured bowl games at the end of each, including a Fiesta Bowl appearance in 2014.

Ask yourself, Tucson, can you do better than Rich Rodriguez? Wait, I’ll take that one….no.

It took you three tries and a lot of luck to finally find a coach who could match the accomplishments of Tomey without harassing players, and while Rich Rod is a TV delight when something doesn’t go his way, he hasn’t lost a game because of his behavior.

Rodriguez also cares about the program. Watch the video of Rodriguez in the hours after the death of offensive lineman Zach Hemmila. No coach is so cold-hearted that such a tragedy wouldn’t impact him, but Rodriguez felt it deeply.

Sure, Rodriguez wanted the South Carolina job last year, but look at the bright side. At 2-7, LSU won’t take his phone call. Even Purdue would hang up.

They say insanity is defined by repeated behavior expecting different results. I’m too nice a guy to go down that road, but if that vocal minority in Tucson gets its way, crazy is about the only word that would describe such a move.