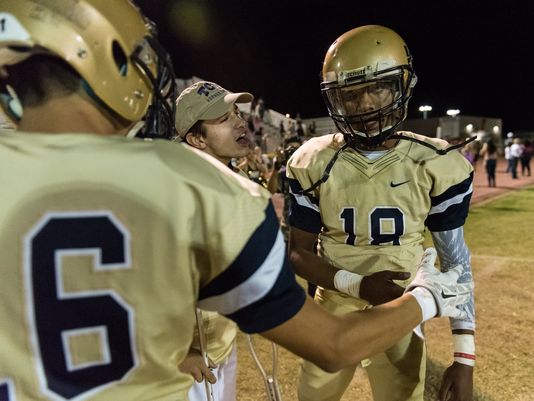 The fields are thinning and the cream is rising to the top as we enter quarterfinals week for upper divisions in the high school playoffs. Remember, all games are on Thursday as we rightfully honor Veterans Day this Friday. Also, reminder to please use our trending hashtag #FridayNight360AZ on all your social media platforms when you’re out at games.

Here are some things which caught my eye this week.

Fallen Star?…Just like at the college and professional levels, the high school football season can also be a war of attrition so-to-speak. Higley finds themselves playing the waiting game this week after star quarterback Mason Crossland (2749 passing yards, 37 touchdowns, seven interceptions in 2016) suffered a concussion in the first half of the Knights 44-0 opening round win over St. Mary’s. His status for Cactus appears uncertain right now.

Crossland was 13-19 for 276 yards and three touchdowns against the Cobras back on October 14th. Junior Jacob Rowland would take over the starting duties if Crossland can’t go.

@HIGLEYFOOTBALL way to step up after losing one of your leaders. Shout out to Jacob Rowland for not missing a beat! #3more #carrytheshield

Thunder Rolls…Dan Hines’ Desert Vista squad enters Thursday’s matchup riding a five-game win streak. One of the Thunder’s key contributors has been junior Alijah Gammage who transferred in from Valley Christian where he was a two-year, two-way varsity performer. The six-foot, 170-pounder came up big last week in DV’s win over Mountain View picking off two passes and helping hold the Toros’ spread offense to just one offensive touchdown.

“Alijah is everything we knew he would be,” head coach Dan Hines told Sports360AZ.com. “Great kid. Unbelievable instincts on the field.”

You could say that.

The younger brother of ASU wide receiver Fred Gammage has seven interceptions in just six games after sitting out per transfer rules. Expect him to get some college interest as he gets bigger and faster this off-season. He has good size and “unbelievable instincts” according to Hines.

The Beast of the East…High school football in the East Valley just seems to get better and better. 10 of 6A’s 16 playoffs teams reside out east and seven of the eight quarterfinal teams are from that “area.” Fifth-seeded Brophy Prep is the lone exception. Third-seeded Perry is 10-1 with their only setback to Chandler. Red Mountain and Desert Vista beat higher seeds to advance in the brackets.

The Town of Brotherly Love…It would be inaccurate to call Bagdad (population 2500) a city. For those of you not familiar, the mining community is located about 100 miles northwest of the Valley, 60 miles west of Prescott. The 10-0, 1A top-seeded Sultans will play third-seeded Williams for the 1A Championship Saturday in Maricopa. Bagdad brothers Israel (quarterback) and Benjamin (wide receiver) Loveall have connected for 18 touchdowns. They’ll be tested against an athletic Williams squad which has both depth and size (a pair of 250+ pound linemen in Mike Bolen and Josh Sanders). The Vikings are coming off an upset of second-seeded Superior.

Too Good, Too Soon…I understand the brackets are what they are but it’s a shame the Centennial-Desert Edge marquee game this week may be happening a round or two too soon. With no disrespect towards any of the other 5A playoff teams above or below them, the Coyotes and Scorpions have the post-season pedigree.

Centennial beats Liberty 24-10. On to the second round. Go COYOTES!!

Richard Taylor’s defense has been smothering, giving up 10 points or less in their last six games. The Scorpions have veteran playmakers on both sides of the ball. Week zero was a 26-24 Edge win in Flagstaff. Expect another street fight in Goodyear.