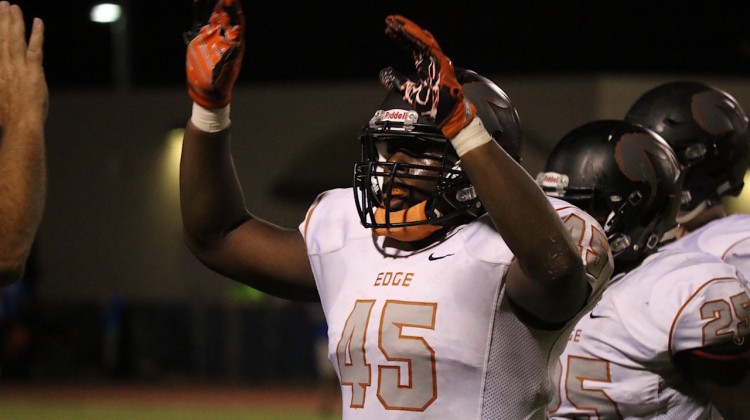 The brackets are in and the seedings and matchups have been analyzed. Here are for each division what I see as the favorites, the challengers and the darkhorses for the 2016 Arizona high school football playoffs for divisions 6A through 4A.

The Pride have run the table in the regular season and quite frankly, I am not surprised they did it. Just loaded with talent in every phase of the game. What I like most about this team though is with the talent, Coach Norris Vaughn has still continues to stick to what has made this a great program the last several years. That is running the football. Even with division I talent on the outside in Jaydon Brooks and Isaiah Pola-Mao, the Pride have stuck to the run and almost rushed for 3,000 yards as a team this season. The offensive line led by Eddie Rivas has been outstanding and the defense is as talented, active and aggressive as any we’ve seen not just this season, but over the last few.

I have seen Chandler twice since they were on the wrong side of a lopsided tilt against Mountain Pointe back on week three and this is far from the same team we saw that Thursday night. The have grown-up, evolved and bought in. Quarterback Jacob Conover is improving with each passing game and the Chandler offensive line has been spectacular blocking for TJ Green and Ryan Johnson. Chandler loves the inside run and what an incredible job center Caleb Medina has done leading the interior line on holes that have allowed Green and Johnson to go untouched at the line of scrimmage. Coach Aguano shifted his gears to the defensive side of the ball after tough performances against Corona Centennial in Southern California and two weeks later against Mountain Pointe. Since, the Wolves have given up 20.5 points per game over their last six which is a deceiving stat because like in the games I saw against Basha and Brophy, points against them were scored with their starters off the field. Lastly, if you don’t know the name Parker Henley, learn it. He is everywhere at linebacker for the Wolves.

The Thunder have been overlooked because of getting off to a 1-3 start to the season and found themselves against the ropes in their fifth game against Dobson. But if you look at how their regular schedule ended up, all four of their losses on the year came to teams who are top five teams in the tournament. I saw them week one up close and personal against Perry. Desert Vista was in control of that game into the second half but turnovers late proved to be costly and they went on to lose the game in overtime. All quarterback Nick Thomas does is make plays and if you remember, Desert Vista gave Chandler all they could handle in the playoffs last season before the Wolves pulled away late. A rematch between those two loom with a possible second round matchup and I think that could be a good one. The first have to get through a tough Mesa Mountain View team who has exceeded expectations this season. I think you also have to put Skyline in the category as darkhorse here as well on the top part of the bracket as well.

The 5A bracket is going to be a lot of fun! The top six seeds in this bracket are all talented and well coached enough to go on a run. So Desert Edge is a blocked kick in overtime the final week of the season to rival Verrado away from being he number one seed. You forget with these incredible teams that they are still being played by teenagers. Kids are going to make mistakes. Desert Edge has been number one all season in 5A and I am going to keep them there as the favorite in this bracket. Might be the worse thing to happen to everyone else in this division that the kicked was blocked. Even for Verrado who finally got that sought after win against Desert Edge and their reward is having to face them again in the first round. That should be one of the most intense first round matchups in the state.

Coach Steve Campbell once again has quietly had a remarkable season with his team which has somewhat flown under the radar. So much talk this season has been of D Edge and Centennial that Williams Field has been seen as third or fourth fiddle but all they have done is run the table in what was a very difficult schedule. They include what I believe is the best wide receiving tandem in this bracket with Max Fine and Justis Stokes who are a big play waiting to happen every night.

I look forward to the Twitter trolls looking to explain to me why the number one seed is considered the darkhorse. And I am sure Cienega is going to be mad at me for not being considered the favorite being the top seed. The fact is, Cienega receiving the number one seed is the first time they have been given their much deserved respect. I am part of the ArizonaVarsity.com Media poll and it has drove me nuts all season the lack of poll points they received and they were constantly no higher than fourth or fifth until very late in the year. They have been one of the most dominant teams in Arizona this season outscoring opponents 470-164 on the year winning in blowout fashion each and every week. Another Tucson program, Desert View, is a great story to keep an eye out for they have ended a long playoff drought.

Lets just be honest here, if someone knocks off Saguaro and gets in the way of another State Championship of theirs, it will be one of the biggest upsets in a long time. So I am going to take this moment to commend the incredible job that Coach Jason Mohns has done. It’s one thing to have great talent, it’s another to utilize it correctly. We have seen some incredible teams have great talent in this state in many sports (basketball especially) that seem like dream teams and ultimately not be able to put it together. The Chandler Wolves are a prime example up until two years ago when they finally got over the hump and won state. But each and every year, Coach Mohns takes incredible talent and coaches them up into being a great team over being a great group of indivisuals. And I have so much respect for that.

The team that played Saguaro the very tough for one half back on week three of this season had one of their best in their school’s history. Higley still has that high powered offense which we’ve seen from them the last three years with quarterback Mason Crossland at the helm but it was the defense that held them back in the last two. This year, the defense has improved drastically with impressive play up front and the result? The Knights are the number two overall seed. I think Higley caught Saguaro a little off guard with their physical play in the first half when they met back on week three. Saguaro regrouped and the rest is history. But that mentality has been a big reason for their success in 2o16 which, oh by the way, they have done without their star tight end Bryce Gilbert all season.

There is no substitute for experience and for these Foothills Falcons, there is a lot of it. A crew of seniors who have been playing on varsity together since they were freshman lead the way for this team hoping for one last big hurrah before going in separate directions after high school. Led by quarterback Rhett Rodriguez and tight end/defensive end Max Michalczik, Catalina Foothills has a ton of talent and maybe behind Saguaro, the most players on one roster in this bracket of guys who will be playing at the next level. I think a possible round two matchup with Sunrise Mountain could bring incredible drama and the winner of that game would be in line to face Higley (if they take care of their business) in what would be another remarkable matchup. We also can’t forget to mention Chase Cord who will be capping off his career as a four year starter at quarterback for Sunrise Mountain in what has been a remarkable high school career and Dysart is another team I am keeping an eye on in this bracket.