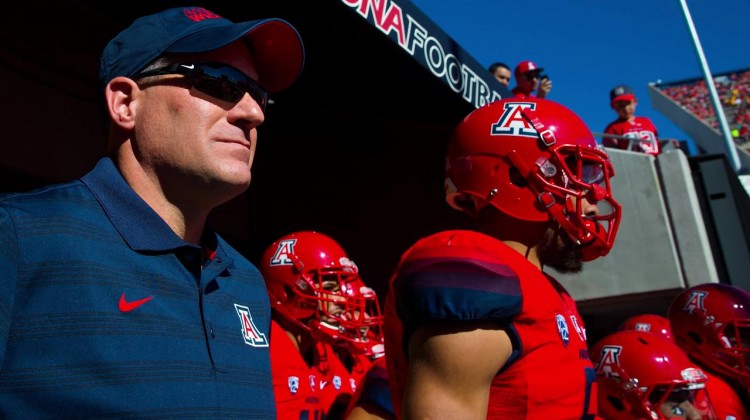 Arizona football is at the crossroad of the 2016 season. A team that won the Pac-12 South title just two seasons ago, is now besieged by injury and a winless record in conference play(0-3).Can head coach Rich Rodriguez keep his team focused and together or will the season spiral out of control?
I watched most of the Wildcats game at Utah on Saturday night and then re-watched Sunday on DVR. It’s a team that has had more than it’s fair share of injury at quarterback and running back, but…hey, that’s life. Can’t use it an excuse, just have to keep moving forward.

The Wildcats have scored first in all three of their Pac-12 games, so they are prepared and ready to go from the opening kick. They’ve played a tougher CONFERENCE schedule than any other team in the Pac-12 South, taking a top ten team in Washington to overtime before falling. Last time I checked, Washington scored again on Oregon while I was writing the opening part of this column. Rich Rods team led at UCLA before the injuries forced the Cats to use a 3rd and 4th string quarterback and running back. No other team in the Pac-12 South has had to navigate the injuries at skill positions like the Cats have had to do this season. Saturday night at Utah, everything looked good for about 25-minutes of the first half. Too bad they run for 30. Finishing games has been this teams bugaboo.

None of this matters to those who are on the fence about buying tickets to this Saturdays home game against USC. A 12:30pm kick-off should mean Athletic Director Greg Byrne is looking at a great crowd. We shall see. I’ve gotten notes from those who want to read and hear more from us about the powerful Arizona mens basketball team that could be a Final Four squad. We will get to that in due time here, but not quite yet.

It seems to me that Rich Rod has to decided once and for all who his quarterback is going to be for the rest of this year and the 2017 season and live with it. The time for Anu Solomon may have come to an end in my opinion. Both Brandon Dawkins and Khalil Tate have been able to move the ball at times, but they’ve also stepped on land-mines too. The only way to get out of inexperience is to play. Keeping both of them on the sidelines for Solomon doesn’t seem to me to make sense at all at this point.

Beat USC at home this Saturday and the Cats get a bye week and a good story to tell recruits. A loss on Saturday, means they’ve got to string wins together against Colorado, Washington State, Oregon State and ASU for a winning season. That’s not a murderers row, but if you can’t close games out, it may end becoming a weekly black hole.