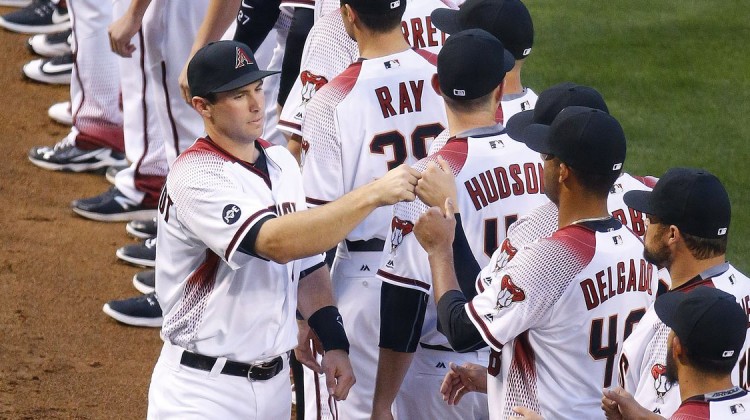 The Arizona Diamondbacks are making their way down the off-season to-do list with still one very significant note on the agenda starred, circled and highlighted.

Who will be the club’s next manager?

Many around baseball circles believe new executive vice president and general manager Mike Hazen was a solid hire whose blueprint will add stability to a front office in search of an identity.

One name that was instantly attached to the D-backs was Red Sox bench coach Torey Lovullo who worked with Hazen in Boston and is expected to interview with Arizona.

One MLB insider believes Lovullo has the makeup to be a successful manager at the big league level. He got a s taste of running a big league team when he took over last year for John Farrell after he was diagnosed with stage 1 lymphoma.

“Everybody that I’ve talked to with the Red Sox told me that Torey will be a very good manager down the road,”ESPN’s Pedro Gomez told Sports360AZ.com’s Brad Cesmat during his weekly segment Wednesday. “I think he and Hazen have a pretty good relationship so it would not surprise me if that’s the guy.”

Former San Diego Padres manager Bud Black’s name has also surfaced as someone who could fit should the D-backs’ brass opt for someone with big league managerial experience. The 59-year-old went 649-713 in San Diego from 2007-2015 and was named the 2010 National League Manager of the Year.

“Tremendous person, tremendous manager,” Gomez explained. “[Black] really did a lot with a little. His rosters in San Diego were so, so limited…he’s a guy that players absolutely play hard for all the time. He is refreshingly honest and will manage again. If he’s the guy, another great choice.”

Gomez believes Hazen may go “against the grain” with this hire and tab somebody that has not managed before. One benefit of potentially hiring Black would be it would be like adding a second pitching coach according to the MLB insider. Black won 121 games over his 14-year career, including two World Series Championships as a player.