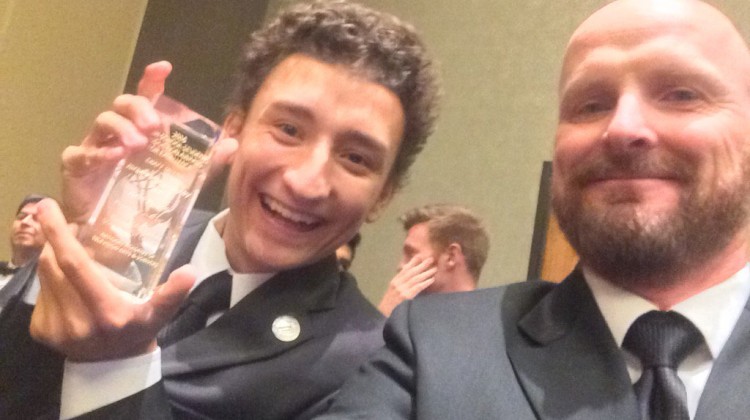 Some acquire talent as they go through life,others are just born with it.

In Perry High School senior Joran Palacio’s case, it appears he was born with a knack for bringing sports to life through his eyes and voice.

Palacio shined at the Rocky Mountain Emmy’s last week, winning a Student Production Award for his play-by-play reel. His calls were selected over 120 other high school and college students.

The kid from San Tan Valley is an Emmy award winner! One of the most gratifying nights of my life pic.twitter.com/mF4YAqnfgA

“Any journalist or play-by-play guy would all jump at the chance to even be nominated [for an Emmy] so the fact I won one in high school definitely separates me from everyone else at my level and hopefully will help me out in the future,” Palacio said to Sports360AZ.com.

Palacio is part of Perry Primetime Sports, a student organization that covers all Perry sports.

PPS advisor Brian Bernier said if he could describe Palacio in one word it would be versatile.

“I think it is his ability to take constructive criticism and learn from it [makes him special],” Bernier said. “He continually tries to make the whole broadcast better. From player stories to graphics packages he is a leader of our student team and is one of the main reasons why our student productions run well. Joran sets the standard on our team.”

The young journalist began doing play-by-play his freshman year of high school and has broadcasted several sports throughout his career.

Palacio plans to take his passion for sports broadcasting to the Walter Cronkite School of Journalism at Arizona State next fall.

“Joran is planning on going to [Cronkite] and from there I believe he can have a very successful and long career in sports broadcasting,” Bernier said. “He is an extremely humble and affable young man and will do well in building relationships within the industry.”