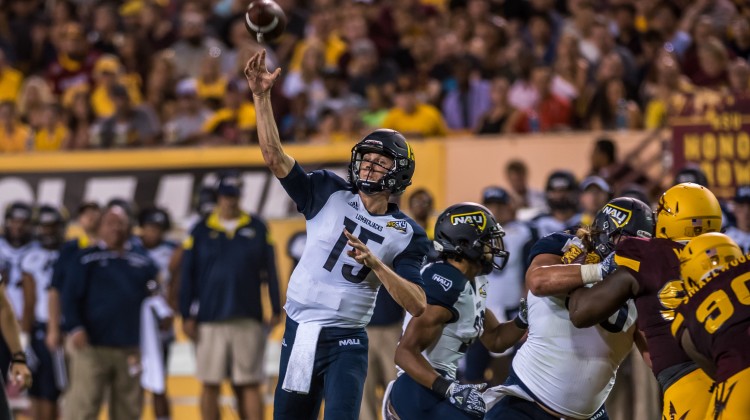 The NAU Lumberjacks football team has been playing without their star quarterback Case Cookus the last couple of weeks and on Wednesday, it became official that this shoulder injury will end his 2016 season after playing in just four games.

“Unfortunately at this time we have to announce that Case has been ruled out for the remainder of the 2016 regular season due to a shoulder injury,” said NAU head coacher Jerome Souers in a statement Wednesday. “Obviously, the initial injury was difficult on our entire team; not only is Case clearly one of the best quarterbacks in the country, but he’s an even better person and our leader. Case is in good spirits, rehabbing well, and we fully expect him to return even more motivated than before to lead the Lumberjacks to great heights in the future. It is impossible to replace a player like Case, but our team will continue to rally around Blake Kemp and play Lumberjack Football.”

Kemp, the former Hamilton Husky from Chandler, AZ, has come in and played well for the ‘Jacks appearing in six games and starting in four of them. He’s thrown for 1,123 yards and ten touchdowns. Most recently he lead the way for a big 45-34 win over conference rival Montana.

“I had high hopes for my teammates and myself this season, after what we were able to produce last season, but unfortunately I was injured my throwing shoulder during the Eastern Washington game and have been sidelined since,” said Cookus. “My current focus is on rehabbing and getting myself ready to help the team next season.”

Cookus appeared in four games this season before suffering his injury, which allows for him to use a medical redshirt and still have three years of eligibility left. NAU returns to action on the road at Weber State this Saturday. Kick-off is at 11am.