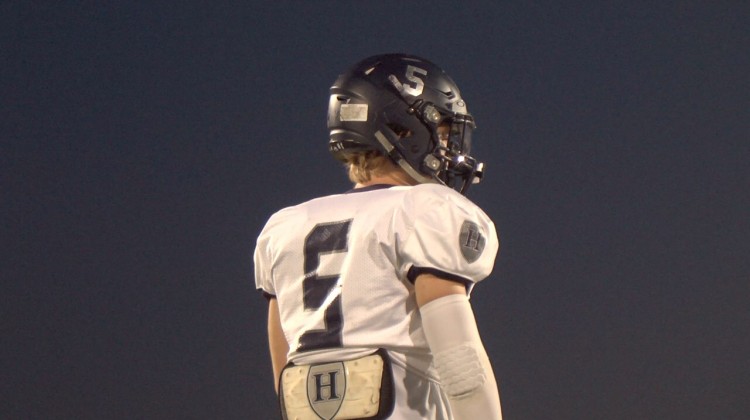 Playing opposite one of the top offenses in the state it may be easy to overlook Higley Knights middle linebacker Cade Matthews.

That is until you look at his stats and watch him single-handedly wreck opposing offenses every Friday night.

The 6-foot-1, 212-pound junior transfer from Williams Field came into Friday’s game against Cactus averaging close to 11 tackles per game. Of his 74 stops, 14 have come for loss.

Did we mention he also has five-and-a-half sacks and three forced fumbles.

It’s all combined to be the perfect remedy for the Knights (7-1) who allowed close to 40 points per game in 2015. That number has been cut down significantly this fall thanks to Matthews and an attacking defense who is holding opponents to around 10 negative plays per game and forcing two turnovers per contest.

Knights’ head coach Eddy Zubey knows Higley was a right-place-right-time fit for Matthews. He has shined beyond expectations in his first season on varsity and first on campus.

“You could tell, just from his physical makeup of his body that he was a football player,” Zubey told Sports360AZ.com after the Knights lopsided win over Cactus. “He used to play quarterback as well so playing middle linebacker and being able to run our defense has been great for him.”

Against the Cobras Matthews was his usual, disruptive self registering 10 tackles (two for loss), a sack and forcing a fumble. Those stats are even a bit skewed considered he rolled his ankle towards the end of the first half and didn’t play most of the fourth quarter.

Matthews has thrived in a scheme which fits his strength.

“We have a lot of calls [defensively], so I can stay inside the box all the time,”  Matthews said to Sports360AZ.com. “I’m basically just stopping the run every play. I’m calling the defense with recognizing the formations and giving the signals.”

Zubey has already seen a maturity and leadership quality which can be rare with first-year players at a new school with a winning tradition like Higley.

“He’s awesome,” he explained. “In the weight room he loves to work out. He’s a quiet leader in that aspect but when he’s on the field he’s definitely a little more vocal.”