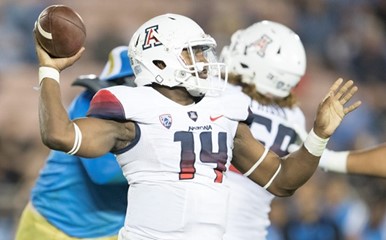 The Arizona Wildcats’ struggles against UCLA under Rich Rodriguez continued on Saturday as they fell to the Bruins 45-24 from the Rose Bowl. Rodriguez is now 0-5 against UCLA since taking over as head coach in Tucson.

Last year it was the defense. The linebackers to be specific. This year, the Wildcats offense can’t get above water with all these injures. Any Solomon is still sidelined, JJ Taylor is done for the year, Nick Wilson returned to action but he limped off the field in the first quarter. The offensive line is beginning to fall apart as tackles Gerhard de Beer and Jacob Alsadek also suffered injuries in the game after left guard Freddie Tagaloa did not even make the trip with the team.

As mentioned, Solomon is already out. In the second quarter, quarterback Brandon Dawkins took a shot from linebacker Kenny Young. After halftime, true freshman and SoCal native Khalil Tate took over and did a nice job in his first college action. He chose the Wildcats during his recruitment over other big time programs because they offer him at a signal caller and not an athlete. They’ve already paid off with that notion. He had 72 yards passing and 79 rushing with two touchdown passes. One to Shun Brown and the other to Cam Denson. Who will be quarterback next week will be another week long storyline.

Let’s break a trend. Only when a kicker struggles do we find their name brought up. It’s a no news is good news type of gig. But Josh Pollack is off to an excellent start this season for the Wildcats. Casey Skowron held the position the two previous seasons and became very reliable by the team his career in Tucson came to an end. Josh Pollack had some big shoes to fill and has answered the call. He is 5-6 in field goals thus far this season with a long of 46 and a perfect 17-17 on extra points.

NOT GETTING ANY EASIER

The Wildcats now enter make or break mode with what’s coming in October on their schedule. Next up is a matchup in Utah who is off to a great start this season. Though Arizona has had success the last few times out against the Utes, playing in Salt Lake has become one of the toughest places to play in the conference. After Utah, the Cats host USC and Stanford and then travel to Pullman to face Washington State, who they lost to at home last season, to start November. A very difficult stretch is upon them.