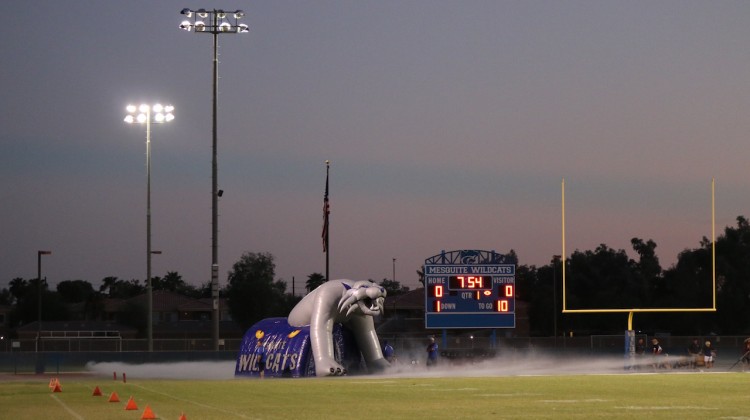 The high school football regular season is coming to a close soon, and teams are trying to make sure their rosters are ready to go when the playoffs roll around. Here are a few teams and players that have jumped out to me over recent weeks:

Marcos de Niza made waves with their playoff run last season when they reached the state championship game as a five-seed. The Padres could be setting up for a similar run. They sit at 5-2 with their losses coming to top-ranked Saguaro and under-the-radar Casa Grande. This is going to be a team that no one will want to play when the playoffs roll around. They have a three-year starter at quarterback in Naz Greer, a reliable running back in Zyayre Moss and two of the best linebackers in the state in senior Anthony Nicastro and sophomore Mario Gastelum.

The Chandler Wolves have had big-time receivers over the years, and the depth in last year’s receiving corps was incredible. N’Keal Harry led the way and Kolby Taylor and Johnny Johnson brought speed and reliability for quarterback Mason Moran. This year, Harry is in Tempe and making Pac-12 defenders look silly, and Taylor hasn’t seen the field this year because of a fractured leg. Johnson has stepped in as that go-to receiver for sophomore quarterback Jacob Conover. Johnson, a UNLV commit, and breakout junior Gunner Romney have combined for 1,530 yards and nine touchdowns. Another year, another very scary Chandler offense.

Chad DeGreiner helped lead the turnaround at Mesquite with a powerful defense and ground-and-pound offense led running back Joseph Eubanks, who packs a punch. One of the wrinkles in the Wildcat offense that opens things up is when athlete Preston Smith goes in the Wildcat formation. He averages 9 yards per carry and has three touchdowns when in this formation and can break some big plays.

Andrew Nichols embodies Centennial football. He plays both sides, is big, athletic, tenacious, tough to bring down and just makes life difficult for the other team. Nichols is a big target offensively at tight end, but he also has a knack for getting to the quarterback as a defensive end and knocking down passes at the line. I was at Centennial’s 41-14 win over Chaparral earlier this year, and it seemed like every time the ball was thrown Nichols’ direction, he got a hand on it.

Desert Edge packs a punch in everything they do. They are known for their dominant offensive line and running game that continually churns out yards and scores. Defensively, they are set up by Dante Blissit and a talented front seven. But the secondary is an underrated aspect to the heavyweight Scorpions. Safety Eric Marsh, the team’s leading tackler, Treyvon Williams, Daejzon Burton and Daniel Pullem just attack the football and make receivers think twice when going over the middle.

Chaparral had to replace a lot of key players from last year’s squad, but the future looks fast for the Firebirds. Sophomore running back Marqui Johnson transferred from Philadelphia and Chaparral head football coach Thomas Lewis said Johnson is one of the fastest players he has coached. Johnson leads the team with six touchdowns and has the home run capabilities every time the ball is in his hands. Be on the lookout for him over the next few years.

Get ready, folks. The fun is just beginning as teams are battling to get into the playoffs and for section titles. Make sure to use #FridayNight360AZ to share updates, photos and videos, and track the latest high school news and scores under the Friday night lights.