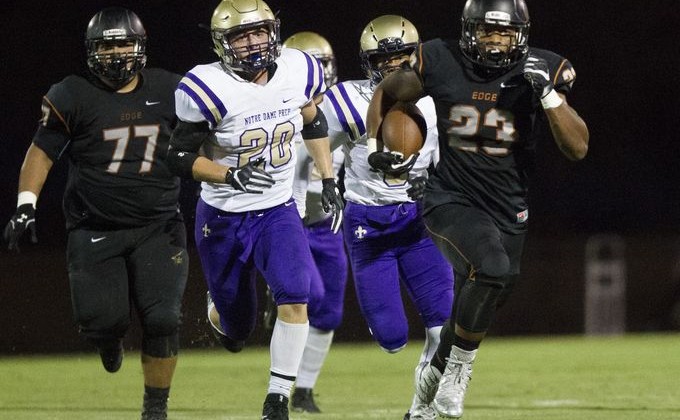 While the weather is starting to cool just a bit, the high football season is ramping up in late September. Another interesting week around the state so let’s get to it…

Summer Work…The Desert Edge Scorpions are off to a 5-0 start and should stay perfect this weekend facing west Valley neighbor Agua Fria (1-4). Rich Wellbrock’s squad is led by a group of battle-tested seniors who are looking to repeat as state champs. One is steady Roshaun Johnson who ramped up his training last summer with speed drills under the guidance of coach Dre Rodriguez and running Estrella Mountain in the desert heat.

He is taking an unofficial visit to UNLV this weekend and plans to visit Colorado sometime this fall. The well-rounded running back/middle linebacker has an offer from the Rebels and five others schools.

All In The Family…When Boulder Creek starting quarterback Daniel Carrizosa left with an injury against Red Mountain last week head coach Anthony Casarella turned to sophomore Hendrix Johnson who threw his first career touchdown pass. If the Johnson name rings a bell up in Anthem, it should. Hendrix’s brother Gunther amassed over 8,000 total yards and 73 touchdowns during his career with the Jags. This fall he walked on for Rich Rodriguez at Arizona. Gunther was a three-year all-conference selection at BC.

Tough break…Pima quarterback Josh Whitaker plays really well with a large cast on his left arm but he won’t be in uniform for the 5-0 Roughriders when they host neighbor Thatcher (4-1) in a big 2A East Region battle Friday night. The junior was ejected from Pima’s win over Bourgade Catholic last week after committing two personal fouls. Hearing one of the talented twins Jarrett Kartchner, and Ryne Lewis will both see action behind center. Pima and Thatcher are separated by just five miles down in southeast Arizona.

The (Golden) Bear Necessity…Former Saguaro star Luke Rubenzer will be back in the Valley this weekend as Cal takes on ASU in Tempe. The junior had seven tackles and a big interception before halftime as the Bears upset Texas in Berkeley.

Saguaro alum Luke Rubenzer with the interception for Cal. Huge play- allowed Cal to take the lead before half. pic.twitter.com/f51C6RTGeJ

Rubenzer, a duel-threat quarterback and two-way star for the Sabercats, was moved to safety after playing behind first overall pick Jared Goff the last two seasons and Texas Tech grad transfer Davis Webb this fall. Expect him to be around the ball quite a bit Saturday at Sun Devil Stadium.

The Rhett Stuff…Tucson Catalina Foothills Rhett Rodriguez isn’t the only talented quarterback in the state with the first name “Rhett.” Show Low’s Rhett Ricedorff is off to a quick start for the unbeaten Cougars who make their way down to the Valley to take on South Mountain(1-4) Friday. The coaches’ son has thrown 11 touchdowns with just two interceptions completing close to 60% of his throws after a big junior season. His older brother, Rathen, put up big numbers  in 2009 and 2010 and is now the starting quarterback at Mesa Community College after a stint at ASU. Their dad Randy Ricedorff has led the Show Low to two state titles (2007, 2010). Show Low has been a football staple of success in the White Mountains.