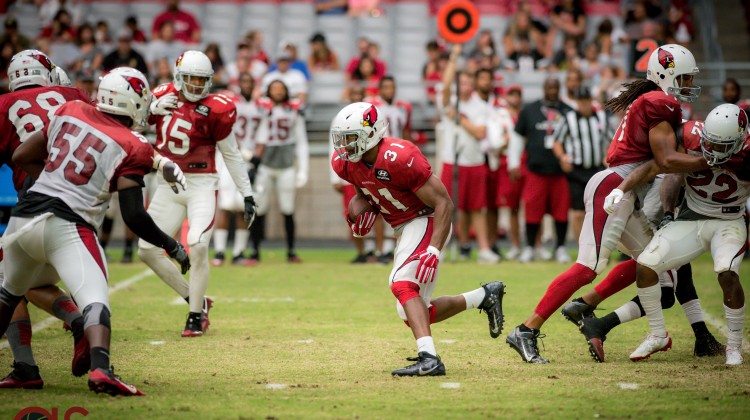 Finally! The games will count!

Week One is upon us and the Arizona Cardinals are gearing up for the New England Patriots this Sunday on a national stage. Here is what is being said by the Cardinals as they prepare for their 2016 regular season opener.

Bruce Arians on NE QB Jimmy Garrapolo: Very athletic, very accurate. Not a very powerful, deep throwing arm but very accurate and gets it out of his hands fast.

Chandler Jones on how his former team prepares: One thing I do know about the Patriots is that they will look to expose certain weaknesses. That’s what they do. They do a good job of studying you team’s weaknesses and if there is a weak link on the team and look to expose it. So thats one thing that you have to look out for.

David Johnson on the big number of returning players from last year: The main thing is everyone coming back without injuries. Especially with the running backs, we have all of our guys back so that way we can all play and contribute to the team and open the play book a little bit.

Bruce Arians on Rob Gronkowski: There is only one Gronk…He’s going to make his plays, you’ve just got to tackle him. The biggest thing with Gronk is getting him on the ground when he catches it because when he breaks it, it’s a big play.  They thrive on running after the catch. We’ve got to do a good job of tackling.

Brandon Williams on being ready to be targeted playing opposite Patrick Peterson: Of course I have no choice but to be! Obviously I have to be but Coach Arians has a lot of confidence in me to be starting me week one so I feel like I am ready.

Calais Campbell on playing in Prime Time to start the season: As soon as you get the schedule, you look for the prime time games. It used to be that you have one or maybe two. This year we have a few and can be flexed. Even last year we had a bunch. You always like to be on prime time and play in front of your friends and family all over the country so you want to put on a good show for them.

Bruce Arians on how Tyrann Mathieu has looked in practice: About two interceptions every day. Makes all the right checks and has the energy and the passion that he always has.