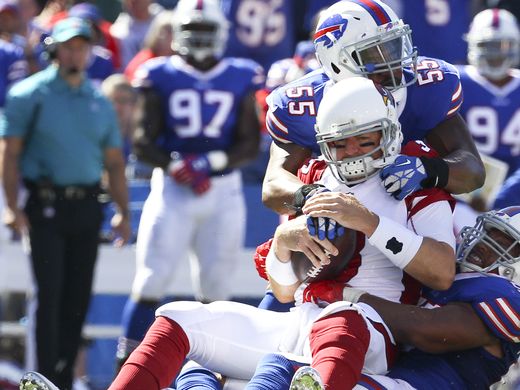 Bruce Arians had plenty to say in his weekly press conference following the Arizona Cardinals’ 33-18 loss to the Buffalo Bills. The Cards’ head coach led things off with some news regarding injuries:

Not a lot went right for Arizona on Sunday, especially when considering the Bills were without their biggest playmaker in wide receiver Sammy Watkins. Was this the worst loss in the Bruce Arians/Steve Keim era? Arians weighs in:

There’s no doubt. We’ve never given up that many yards rushing, never had that poor of a performance on third down. Even against Carolina last year, we were moving it but shooting ourselves in the foot. This one was a good fashion butt-kicking, and we took it.

The Cardinals are now 0-3 in the past two years when going to the eastern time zone and playing a game with a 1 p.m. kickoff. Arians said the Cardinals struggled with communication in front of a loud Buffalo crowd:

First time on the road and the crowd noise, there were some communication issues as far as just talking to the guy next to you, and you have to learn from that especially with (Earl Watford) and (D.J. Humphries) over there.

The communication struggles were never more evident than when multiple Carson Palmer passes landed in one spot and a Cardinals receiver was standing elsewhere with his arms up in confusion. While the Cardinals relied on the hurry-up offense, there were times where calls got lost in the noise:

Three of them were no-huddle communication. “potatoes” sounds like “tomatoes”. You’ve got to hear the right word to run the right route because he is throwing anticipation throws.

A common theme for the Cardinals, in wins and losses, has come when the team starts the second half:

The big thing for me is figuring out why we are so poor when coming out at halftime. Three weeks in a row, we have not played the first five minutes of the third quarter like we had talked about in the locker room. Identifying it is one thing, finding a solution is another. I have to find a solution.

With proven performers like Carson Palmer, Larry Fitzgerald, Patrick Peterson and Calais Campbell, the Cardinals have the talent that can win NFL games, but the issues in this early season may be coming elsewhere, according to Arians:

If you’re a leader, you need to have followers. We have a lot of young guys, I think, that like doing their own thing. They need to follow the leaders who work real hard, do all the things it takes because they’ve been down that road. We’re still finding out about ourselves.

One of the more frustrating plays for Cardinals fans was when Tyrann Mathieu was able to force a fumble in the backfield but could not recover the ball before it went out of bounds.

Tyrann Mathieu, trying too hard to make a play. Didn't pick it up. Kicked it out of bounds and Bills keep it.

While many would have wanted for Mathieu to fall on the fumble, Arians trusts his safety’s judgment and can see his playmaker getting back 100% from his ACL injury suffered last season:

No, pick it up and score. That’s what Tyrann does. Great play, it was really nice to see because that looked like Tyrann again.

He is getting close.

The Cardinals try to get back in the win column on Sunday against the Los Angeles Rams.